"How to DJ with Apple Music? I am an Apple Music subscriber and have downloaded many Apple songs to the Apple Music library on my computer. But when I try to import those tracks to my virtual DJ software, I could not find any music files on my local computer. What is going on?"

Some DJ beginners or someone new to streaming music may come across similar problems when using Virtual DJ software and Apple Music. But it doesn't matter. In this post, I am going to list and analyze the key points that why can't add Apple Music to Virtual DJ. And give the most practical instructions on how to use Apple Music on Virtual DJ. 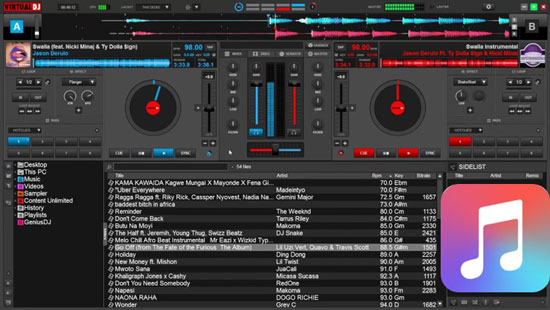 The first thing that you need to make clear is the meaning of "download songs" in Apple Music. It presents that you can listen to your favorite Apple tracks offline in your Apple Music library. But it doesn't mean that you can use and edit those songs in other applications, or transfer Apple playlists to the unauthorized players and devices for offline playback. For the time being, Virtual DJ software doesn't integrate with Apple Music. And that is why Apple Music subscribers can't use Apple Music with Virtual DJ.

There are two solutions to handle this problem. One, directly buying Apple tracks from the Apple Music store. The purchased songs or albums are totally different from the downloaded tracks. All purchased Apple audios are unprotected for you to move them to any editors and players. The only downside to this approach is the extra charge of every single song. Plus to the subscription fee, It appears that you need to pay twice for one song.

If you want to save some money, you can check the second method. This method requires technical support from a third-party tool named AudFree Apple Music Converter. This tool is specially designed for Apple music conversion, applying to convert Apple Music to MP3, FLAC, WAV, AAC, M4A, M4B, and other universal formats. The converted Apple audios are saved as unprotected files on your local computer.

In addition, due to the combination of the latest converting technology, AudFree Apple Music Converter can save 100% original quality and identify 100% raw metadata in the converting process, such as titles, albums, artists, track numbers and etc. In other words, the converted Apple music files are exactly the same as the purchased ones. This smart tool is not totally free, but it is a lifelong guaranteed product. Once you purchased it, you can enjoy the convenience of Apple music conversion for a whole life.

Download and open AudFree Apple Music Converter on your computer. The Music app will automatically launch. Make sure all tracks you would like to convert are downloaded in your Apple Music Library. Then turn to AudFree's main interface. Hit the first "Load Library" icon from the bottom left corner. In the pop-out window, select the objects you want to convert and add them to AudFree. A few seconds later, check if all of them are loaded into AudFree.

If you are running macOS, please move your cursor to the top left corner of the whole screen. Enter to Mac's menu bar > click to "AudFree Apple Music Converter". If you are running Windows, just direct to the bottom right side of AudFree's main screen. Find and tap on the first "Format" icon. In the new opened Settings windows, you can reset the output parameters. Then press "Save" to commit the results.
Tips: To keep the best output quality, for AAC files, please select the output format to MP3, sample to 48000Hz, change the bitrate to 320kbps. For ALAC files, please choose the output format to FLAC, sample to 48000Hz, change the bitrate to 512kbps.

Now just click to the big "Convert" button to start converting. The whole process depends on how many tracks in the waiting list. When the task is finished, a red spot will show on the "History" icon. You can click it to navigate to the "Converted" folder where saves all converted Apple tracks.