When I search whether 'Spotify on Fitbit' is available on Fitbit Community, I found that there are a lot of Spotify lovers having the same confused problem, such as does Spotify work on Fitbit Versa or Ionic? When is Spotify coming to Fitbit Ionic? Are there plans to introduce Spotify to the Fitbit for storing offline songs, etc.

All of us will get an official answer from Fitbit Community, 'Thanks for your interest in a Fitbit Versa Spotify app or Fitbit Ionic Spotify app. To make it possible, you'd better to vote for the Feature Suggestion asking for a Spotify native app on Fitbit.' In short, there is no official way to listen to Spotify on Fitbit Versa and Ionic at least not at the moment.

Instead of waiting for long time in getting Spotify compatible with Fitbit, I have discovered an effective way to use Spotify on Fitbit Ionic/Versa for playback. If you are interested in this topic, you can follow my successful experience in the article. 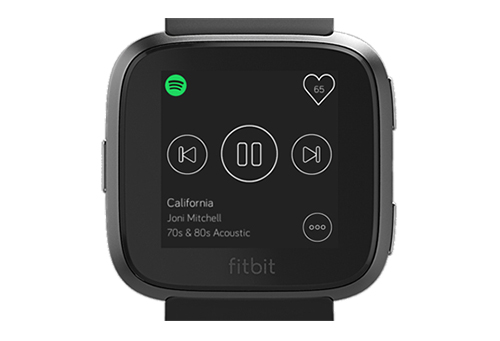 With large 2.5 GB music storage, Ionic and Versa smartwatch are ideal devices for music playback when doing exercise packed with extraordinary fitness guidance, health insights, etc. However, it could be bummed out that both Fitbit watches are only available for Pandora and Deezer but no soup for Spotify, the world's largest music streaming service.

Fortunately, I have found out an all-in-one Spotify to Fitbit converter, namely AudFree Windows Spotify Music Converter. It is designed to remove DRM from Spotify music and playlists and convert Spotify to MP3, FLAC, WAV, AAC, M4A and M4B so that uses can transfer Spotify downloads to Fitbit Ionic, Fitbit Versa and other devices. This smart app can keep 100% original audio quality at 5X faster speed while breaking integration issue between Fitbit and Spotify.

In the following tutorial, you can learn on how to download Spotify songs to MP3 and transfer them to Fitbit watches with the help of AudFree Music Converter for Spotify so that you can play Spotify on Fitbit. Please make sure you have downloaded Spotify app on your Mac or Windows OS firstly.

After well installation, please simply click the shortcut icon of Spotify Music Converter to launch it from your computer desktop. And then you can import wanted Spotify playlists that you'd like to play on Fitbit Ionic to this software by copying and pasting the URL of Spotify tracks or dragging the Spotify playlists to main interface directly.

Before get started, you can also set the destination folder as you need. When all customization done, you can start conversion process by hitting on the 'Convert' button, and AudFree Spotify Music Converter will download and convert songs and playlists from Spotify according to your settings. 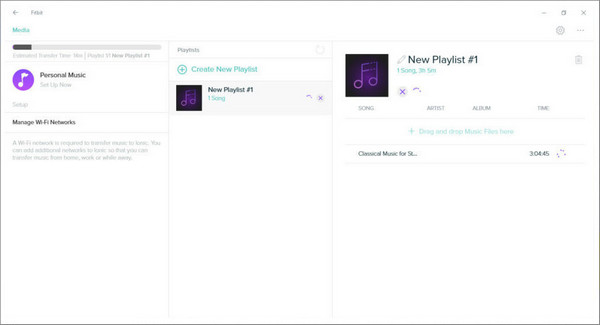 To get Spotify on Fitbit Versa and Ionic, you need to download and install Fitbit desktop app on your computer including downloaded Spotify files. And then refer to the detailed steps as below:

1. Please use iTunes app or Windows Media Player to create a new Spotify playlist. For iTunes users, you need to authorize iTunes to share iTunes Library XML with your Fitbit watch.

3. Connect your Ionic or Versa and your computer with the same Wi-Fi network. And launch the Music app on your watch and scroll down t select 'Transfer Music' to confirm using Fitbit desktop app to transfer music.

4. Just wait for the end of downloading process. Now, you can start to listen to Spotify playlists on Fitbit Ionic and Versa via Music app.

There is an intuitive video tutorial to guide you on how to convert Spotify music and then transfer Spotify music to Fitbit Versa and Ionic for playback.

Fitbit Ionic: As the successor to both the Blaze and the Surge, which are discontinued to offer by Fitbit, Ionic comes with built-in GPS aiming to tap into global satellites and provide better accuracy when recording exercises via GLONASS. In the Fitbit app on Ionic, it supports SmartTrack function to recognize user activity automatically. It also has other great features, such as interchangeable bands, water-resistant, new tactile buttons, etc.

Fitbit Versa: When it released in April 2018, the first impression made by Fitbit Versa is that this smartwatch looks strikingly similar to the Apple Watch 3 and Pebble watches with square design and round edges. Retaining most of Ionic's performance, but its price is lower $100 than Ionic. Of course, it is lack of built-in GPS and needs to use connected GPS via smartphone. It's worth mentioning that Fitbit Versa will be able to track women's menstrual cycles.

How to Play Spotify on Fitbit Ionic/Versa