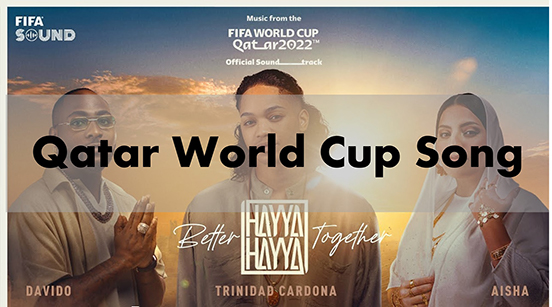 The Qatar World Cup official songs have been released, with five songs in total. These include 'Hayya Hayya (Better Together)', 'Arhbo', 'Light the Sky', 'Dreamers' and 'The World Is Yours to Take'. These songs add to the atmosphere of watching the game. You can find and listen to these songs on Spotify. You can also directly listen to them with the links below.

This is the first official single released for the Qatar World Cup. "Hayya Hayya" means "Better together" in English. It features American singer Trinidad Cardona, Nigerian singer Davido, and Qatari songstress Aisha. The song is upbeat and particularly suited to the atmosphere of the World Cup.

As the second single from the Qatar World Cup song, it was fully released in August 2022. It's a very upbeat song featuring Ozuna and Jimmys with vocals. It means "Welcome to Doha!" (Arhbo). It perfectly captures the welcoming spirit of Qatar.

3. The World Is Yours to Take

It's a high-energy anthem from American rap specialist Lil Baby in collaboration with Budweiser. This song is taken from the chorus of the song "Everybody Wants to Rule the World". It is designed to inspire fans to look ahead and strive for greatness.

This song is sung entirely by four well-known female singers from the Arab region. They include Nora Fatehi, Rahma Riad, Balqees, and Manal. The track is atmospheric and edgy, telling us to "shout if you're with me". It Brings the shared spirit of FIFA World Cup celebrations to life.

Tukoh Taka is the official Qatar World Cup theme song. It has lyrics in three languages, Arabic, English, and Spanish. It is performed by music superstars Nicki Minaj, Maluma and Myriam Fares. The song combines three iconic musical voices from around the globe and represents the inclusiveness of the game.

You can also easily find some playlists which include popular songs about the World Cup. For example, this playlist of "World Cup Songs Qatar 2022" includes all the popular songs.

Part 2. How to Download Qatar World Cup Songs to MP3

You can use AudFree Spotify Music Downloader to download music from Spotify without paying for it. It allows you to download any track, playlist, album, or podcast from Spotify up to 5 times faster. After downloading, you can get 100% of the original audio quality. Not only that, it also allows you to convert Spotify music to MP3, FLAC, and more popular formats. You can then listen to these FIFA World Cup Qatar 2022 songs on any portable device, including MP3 players and more.

Download and install the AudFree Spotify Downloader via the 'Download' button above. Then open it and find the Qatar World Cup 2022 official songs you want to download. Drag and drop them directly from Spotify to this converter. Or, you can copy and paste the link of them into the search bar of this software and press '+'.

Click on the 'Menu' button at the top right and then choose the 'Preferences' section. Go to the 'Convert' bar to customize the output parameters. You can choose the MP3 output format as it's the most common-used one. You can also change other settings if you want.

Click on the 'Convert' button and then it will download your added Qatar World Cup music at 5X. When it's over, you can find the downloaded audio files in the 'history' section. Then you can listen to these downloaded songs offline anywhere.

You can enjoy Qatar World Cup songs while watching the game. To listen to them offline, you can use AudFree Spotify Downloader. It allows you to choose the output format as MP3, FLAC and so on. This can be adapted to your various devices. Better yet, it doesn't require a Spotify Premium subscription.