As an electron pop music lover, you must be familiar with one of the most exciting names, Alan Walker, a Norwegian DJ and record producer. His first official electro-acoustic work 'Faded' on YouTube has gotten more than 3.3 billion hits on YouTube and has also earned platinum certifications in over 10 countries.

Although 25 years older only, Alan Walker's audio and video tracks have been streamed over 11.1 billion times all over the world and he has almost 41.9 million followers across social media. Alan Walker's debut studio album, 'Different World' was released on 14 December, 2018. The second album titled 'World of Walker' was released on 26 November, 2021. And in 2022, he's working on the second part of the Walkerverse world tour.

Are you one of Walker's die-hard fans? Don't miss this article, where you can get some tips on Alan Walker songs MP3 free download. Besides, we will also give a more detailed introduction about Alan Walker songs. 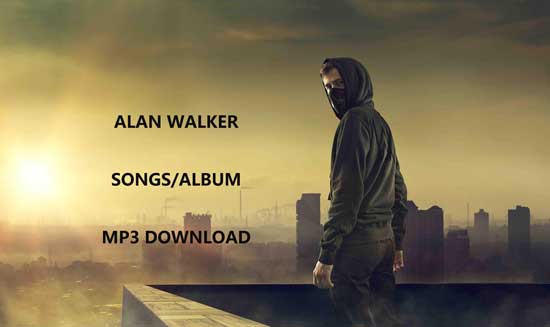 The above two downloading tools can download Alan Walker songs to MP3 with a few clicks only. But to download 'Different World' and 'World of Walker' albums to MP3 files for free, you'd better use AudFree Spotify Music Converter as it doesn't require you to upgrade your account to Spotify Premium. Let's see the detailed steps.

To export Alan Walker MP3 songs and album, please enter to the top menu and click the 'Preference- > 'Convert' button, it will pop up a setting window. And then you can define output format as MP3. With a free Spotify account, you'd better customize bit rate as 320 kbps and sample rate as 414,000 Hz to get better audio quality.

With the release of 'Faded', which quickly spread like wildfire, Alan Walker has been well-known worldwide in 2015. According to the DJ Mag's Top 100 DJs list, he was ranked 55th in 2022 on the official DJ ranking list. Alan also collaborated and remixed popular songs with Noah Cyrus, Sia, Bruno Mars, Lay, Avicii, Coldplay, Bass Hacker and others. Certainly, apart from 'Faded' single, Alan has produced a lot of other popular singles. What are they? See the best Alan Walker song list as below.

Single Me to Sleep: Released on 3 June, 2016, this single also features female vocalist, Iselin Solheim. The style of 'Single Me to Sleep' is similar to its predecessor but also gained praise from music critics. It's worth mentioning that this song peaked No.1 on iTunes charts.

Alone: In 2016, Alan Walker released this second single on 1st December. This single features with uncredited Noonie Bao, the Swedish recording artist. The song has earned more than 210 million streams on Spotify.

Tired: Released on 19 May, 2017, Tired was released, which is the first electronic recording song coming with the first male vocalist who cooperated with Walker, Gavin James, Irish singer-songwriter. This song 'adds another dimension' to Alan's productions said by himself.

The Spectre: With over 430 million hits on YouTube, 'The Spectre' was released via Mer Musikk, which is a vocal remake of 'Spectre', Walker's 2015 single. Walkers said this song is made for his core fan to thank them.

All Falls Down: Featuring with Noah Cyrus's incredible voice and Digital Farm Animals, DJ and record producer, 'All Falls Down' was released before the day of Christmas Eve, 2017. It could be important to Alan as it symbolizes his evolvement to an artist.

Different World: It was the first single on Alan Walker's debut album of the same name, which come out on 14 December, 2018. The core of this song is to make listeners pay attention to climate change, raise awareness and create a different world together.

Darkside: This song featuring with Au//Ra and Tomine Harket was released on 27 July, 2018. It is the second chapter in the "World of Walker" trilogy following up 'All Falls Down'.

Diamond Heart: 'Diamond Heart' featuring Sophia Somajo was released on 28 September 2018. It's the third and final song of the World of Walker trilogy. This song gives an uplifting feeling.

On My Way: This song was produced by Alan Walker and Big Fred and became the theme song for PUBG Mobile's 1st anniversary event.

Here, you can stream and play all Alan Walker songs through Spotify App. Or just use the above software to download Spotify songs without Premium as MP3 for offline playback.

What Is Alan Walker's Most Famous Song?

Faded. With over 3.3 billion views, Faded music video is the 14th most viewed one on YouTube. And it reached the top spot in many countries.

How Many Songs Does Alan Walker Have?

Now, you have full knowledge of Alan's work and can download Alan Walker songs, like 'Faded', 'Alone', 'All Above' and other best songs as MP3 for free. It's your turn to play Alan Walker MP3 downloads on your favorite devices even without a network connection.