As you all know, Deezer is one of the best music streaming platforms. Since people like to listen to music on the go, you can install Deezer on Fitbit Versa and listen to your favorite songs when you go out for a walk next time. But to start playing Deezer on Fitbit, you will first have to download the Fitbit Deezer app. So, to make things easy for you, we have prepared this guide that will walk you through the installation process and help you with an alternative way to enjoy Fitbit Deezer offline.

Deezer currently boasts 73 million-plus songs, which means no matter which genre of music you prefer, rest assured Deezer will have it. Moreover, integrating Deezer on Fitbit Versa is effortless. So, let's get started and find out how to sync Deezer with Fitbit Versa. 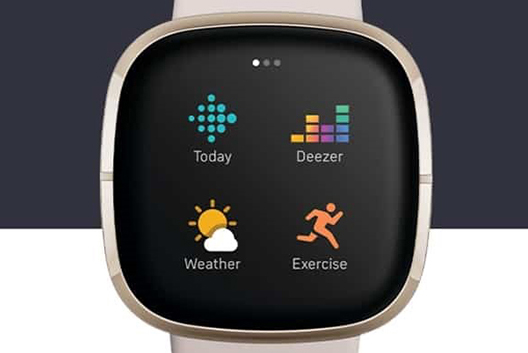 Part 1. How to Get Deezer on Fitbit Versa 3/Versa 2 Officially

How to Install Fitbit Deezer App

Step 1: Take your Fitbit Versa watch and connect it to WiFi.

Step 2: Then, open the Deezer app.

Step 4: Look at the Deezer app, and you will see the Fitbit Deezer activation code. Enter it to set up Deezer on Fitbit Versa.

How to Activate Deezer on Fitbit Versa

To activate it, here are the steps that you need to follow:

Step 1: Once you enter the activation code, you will be prompted to add your Deezer account. If you are new, you can create a new account.

Step 2: Open the Fitbit app. Then, click on the Fitbit icon. After that, tap on your profile image followed by Image > Media > Deezer to connect Fitbit to Deezer.

Step 3: Click on the "Add Music" tab and select the playlist you wish to listen to via Fitbit Versa.

Step 4: Click on the Deezer playlist so that it can be downloaded. 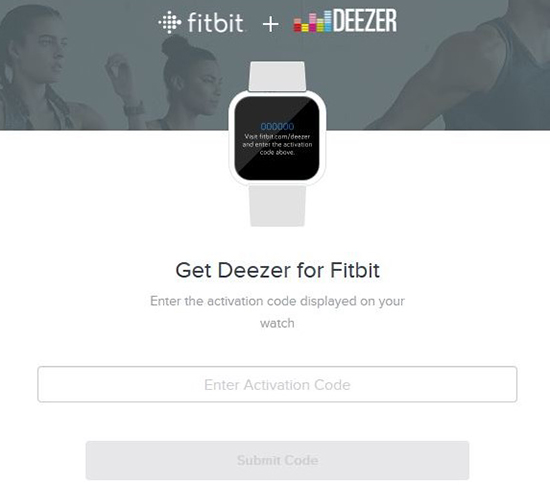 How to Listen to Deezer Music on Fitbit Versa

Now, how to use Deezer on Fitbit Versa? Once you are done with the above two sections, follow the steps below to start listening to Deezer Music on Fitbit Versa.

Step 1: The Deezer playlist/playlists will be downloaded. To listen to the songs, you can connect your Bluetooth device with Fitbit Versa. The device can be a speaker or headphones.

Step 2: Go and launch the Deezer app on the Fitbit Versa watch.

Step 3: Touch the Play button, which you will see beside the playlist.

Step 4: The songs will play once you click on the Play button. You can then skip, rewind, shuffle and browse Deezer playlists.

Part 2. How to Play Deezer on Fitbit Versa 3/Versa 2 Offline for Free

So far, you have learned how to activate Deezer on Fitbit Versa officially. Although you can go the official way, there are a few constraints that you will have to deal with. First, you can only play Deezer songs on Fitbit Versa if you have a paid membership. If not, you won't be able to listen to Deezer songs on Fitbit. Secondly, you can listen to the songs only on the Deezer app, which means you can't transfer them as local files to different devices.

It's a professional and well-designed music converter that lets you download Deezer songs and listen to them on any device you want. Moreover, you can convert Deezer songs to multiple audio formats. Thanks to this powerful tool, you are able to sync Deezer with Fitbit Versa for offline playback at no cost.

How to Convert Deezer to Fitbit Versa-supported Local Files 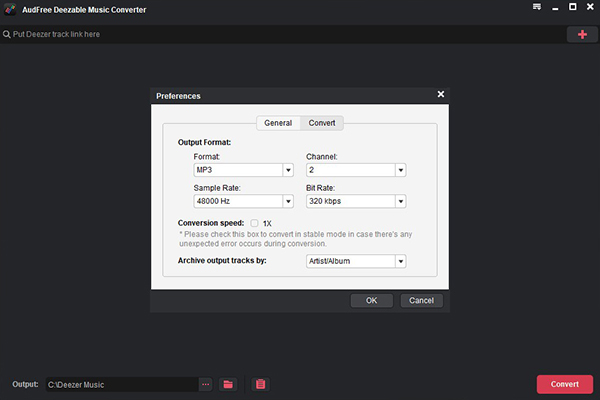 First, download AudFree Deezer Music Converter on your Mac or Windows computer. Then launch it and the Deezer app and use your Deezer credentials to log in. Click on the "Settings" option to select the output format for the Deezer song. It's well-known that Fitbit Versa supports MP3 audio tracks. So, please alter the Deezer music output as MP3 and you can also set the bit rate and sample rate, choose an output folder where you want the converted Deezer songs to be saved, etc. 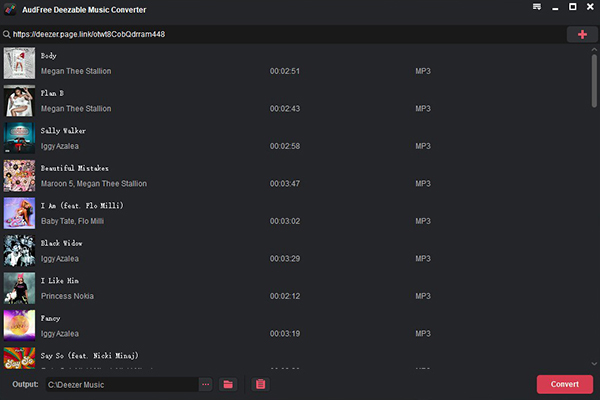 In the opening Deezer desktop app, you can find the songs, albums, playlists, or artists you want to convert and download and click on the 'Share' > 'Copy' button to copy the Deezer music link. Once the link is copied, please paste it to the top address bar and click the '+' button to load them. 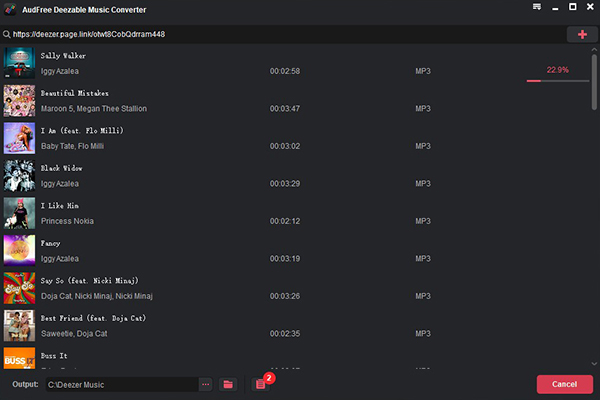 Now, please tap the 'Convert' tab to begin the conversion process. AudFree Deezer Music Converter will download and convert Deezer songs, playlists that you added before to Fitbit Versa-supported MP3 songs at a 5X fast speed. Wait for a while, all Deezer music will be converted and downloaded to your local computer. You can transfer Deezer songs to any device you want, including Fitbit Versa 3 and Fitbit Versa 2 and listen to them offline whenever you want.

How to Transfer Music from Deezer to Fitbit Versa 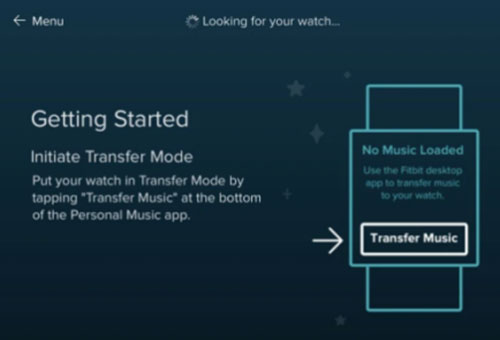 Step 1: To transfer music from Deezer to Fitbit Versa, please download the Fitbit Connect app from the official website on your macOS computer or the Fitbit app from the Windows Store on your Windows computer.

Step 2: Connect your computer and the Fitbit under the same WiFi network. Launch the Fitbit app, and then hit on the 'Manage My Music' on Mac or 'account' > 'Music' > 'Personal music' on PC.

Step 3: Now, please go to your Fitbit device, and then you have to open the 'Music' > 'Transfer Music' to start to choose and transfer Deezer playlists to Fitbit Versa. After that, you can play Deezer offline on Fitbit.

Part 3. FAQs about Deezer and Fitbit

Q1: What Is Deezer on Fitbit?

Deezer is a music streaming app and is now available on Fitbit. With Deezer on Fitbit, you can download all your Deezer playlists and start listening to them via Fitbit. You can connect external speakers and headphones to your Fitbit watch and play the songs.

Q2: Is Deezer Free on Fitbit?

You will get the Premium membership for free for the first three months, but you will have to get a paid subscription after that.

Q3: Do You Have to Pay for Deezer on Fitbit?

Yes, you will have to pay for Deezer to listen to its songs on Fitbit. There are two subscriptions to choose from. You can pay $9.99 per month for the premium plan, where you get unlimited skips and an offline mode listening feature. Next is the Deezer Family plan, which is available for $14.99 per month, and six people can use the same plan.

Q4: How to Unlink Deezer Account on Fitbit watch?

To unlink, please open the Fitbit app first. Then, click on your profile picture and then device image Media. After that, click on Deezer > menu icon. Once there, hut the unlink Deezer account option. 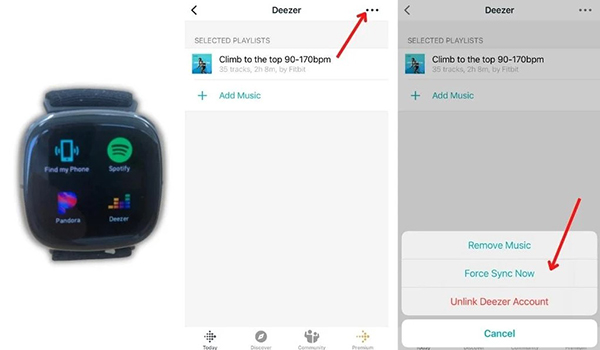 How to Get and Use Deezer on Fitbit Versa Offline
AudFree uses cookies to ensure you get the best experience on our website. Learn moreGot It!