Troye Sivan is an Australia-based singer and actor, who is talented in making lyrical ambient electronic dance-pop. In 2015, he has released his debut studio album Blue Neighbourhood, whose lead single 'Youth' has peaked the number 23 of the Billboard Hot 100 chart as Sivan's first single to enter the top 40 of Billboard.

Are you also a die-hard Troye Sivan fan and can’t wait to get a new album by Sivan? The wait is finally over. The good and latest news is coming that Troya Sivan's forthcoming second studio album as Bloom album will arrive later this summer. In the following article, I will introduce more detailed information about Troye’s new album, Bloom, such as the release date and give you the useful tips Troye Sivan Bloom album MP3 free download. 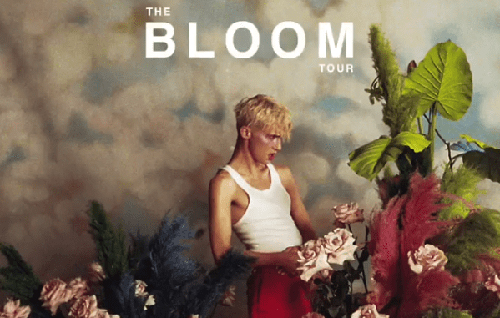 Troye have shared a picture on his Instagram story written 'My album is called Bloom' to intimate that the name of this new full album will be called Bloom in May. Exactly, five singles have been released from the album up to now. Now, let's talk about the detailed info of this Troye Sivan new album.

As a matter of fact, Bloom is set to be released on 31 August, 2018. And Troye Sivan confirmed the release date after a performance of 'My My My!', the lead single, released on 10 January 2018 with Taylor Swift as a special guest on the Reputation Stadium Tour. And this new full Bloom album will include ten singles, including 'Seventeen', 'My My My', 'The Good Side', 'Bloom', 'Postcard (feat. Gordi)', 'Dance To This' (feat. Ariana Grande), 'Plum', 'What A Heavenly Way To Di', 'Lucky Strike' as well as 'Animal'.

Five released singles from the Bloom 2018 by Troye Sivan are available for a wide variety of streaming music platforms, such as Apple Music and Spotify. If you would like to listen to Troye's Bloom at no cost, Spotify is the best place for you to play the full Bloom album, since Spotify allows users to access to them even with a free account on Spotify.

You will be able to listen to Troye Sivan Bloom on Spotify for free, but there is no direct option to get Bloom album MP3 download for offline playback, unless you have upgraded your account to paid subscription for $9.99 per month. Fortunately, there is alternative way for you to download Bloom MP3 full album with a free Spotify account. All you need is a third-party Spotify music downloader that can help you download Spotify files as MP3 with ease.

Here, we can meet AudFree Spotify Music Converter for Mac/Windows, which is designed to download songs, playlists, or albums from Spotify to the local folder on your computer and convert Spotify tracks to MP3, WAV, AAC, M4A, etc. so that you can listen to this Troye’s new album on any device without Internet connection. Besides, you can transfer converted Spotify Bloom album to your car, MP3 players, mobile devices and more for offline listening.

Now, you can use AudFree Spotify Music Downloader to download Bloom's five announced singles from Spotify. Once the full album of Bloom would be released on 31 August, 2018, you can follow the same steps for Troye Sivan Bloom 2018 download. Please be well noted that the free trail version is limited to download one-minute file of each track. You need to buy the full version to unlock it.

If you already got the URL of the Bloom album on Spotify, you can paste it to the search box of AudFree software and click the '+' button to import tracks to AudFree. Or you can directly add the Spotify Bloom to AudFree via dragging&dropping action.

To convert the full Bloom album as MP3, you need to navigate to the top menu and click the 'Preference' -> 'Convert' option to set the output format as MP3. Besides, you can also customize the output audio quality by changing the bit rate, sample rate, audio channel, etc. in the new setting window.

In the starting window, there is a big 'Convert' button at the right-bottom corner of the main interface, you can simply hit on it and AudFree software will start the converting process of Bloom by Troye Sivan MP3 download. You can locate downloaded Bloom album on the destination folder on your computer.

If you'd better to listen to the Bloom album on Apple Music, you should know that Apple has encrypted all Apple Music tracks by Digital Rights Management and there is only paid subscription provided to play music files. Once you have canceled the subscription, all albums will disappear automatically from your library.

But don't worry. AudFree Apple Music Converter can help you extract music from Sivan Bloom album on Apple Music and convert Apple Music Bloom files to MP3, FLAC, WAV and other common audio formats. As result, you can keep the full album of Bloom on Apple Music eternally even without subscription and play Bloom on any device and music player for offline listening with no problem.