When we are talking about Drake (full name for Aubrey Drake Graham), most of us will think of one of the most popular Canadian rappers. From 2010 to 2017, Drake has released four well-known studio albums, respectively 'Thank Me Later', which debuted at No. 1 on the US Billboard 200, 'Take Care' that let him obtain his first Grammy Award for Best Rap Album, 'Nothing Was the Same' and 'Views' sat atop the Billboard 200 for 13 nonconsecutive weeks. And how about this year? On June 29, 2018, 'Scorpion' as Drake’s fifth solo studio album was released by Young Money Entertainment, Cash Money Records and Republic Records, which has broken several streaming records. 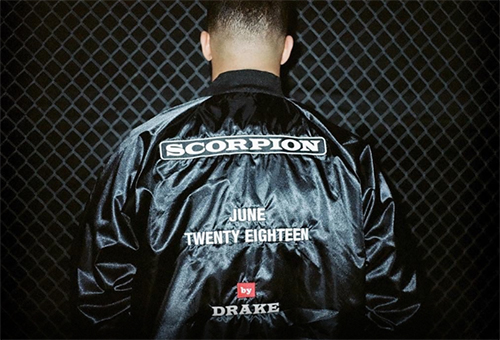 Scorpion is a double album consisting of a whopping total of 25 songs. As a matter of fact, two days before release, there is a promotional 'A SIDE, B SIDE' billboard placed all over Drake's hometown of Toronto, Ontario, from which we can guess that Scorpion is double-sided project. Its 'A side' is primarily a hip hop album, while its 'B side' has been described as R&B and pop.

Drake's Scorpion features guest appearances from Jay-Z and Ty Dolla Sign, unexpected appearances from Michael Jackson and Static Major as well as additional vocals from a wide variety of artists, such as PartyNextDoor, Nicki Minaj, Nai Palm, etc. Besides, it was supported by the singles 'Nice for What', 'God's Plan', 'Don't Matter to Me', 'I'm Upset' and 'In My Feelings'. The first two singles debuted Top 1 place on the US Billboard Hot 100, which is better than the album's release.

Drake's fifth solo Scorpion album broke the first-day streaming record over all platforms, also including the world's biggest Spotify and hottest Apple Music streaming services, after it was streamed 170 million times in 24 hours. It has also broken the one-week streaming record within just three days and was the only album to be streamed more than 1 billion times in history for 7 days. According to the report from Billboard, the first week after release, with the 732,000 equivalent album units, has also reached number one on their Billboard 200 chart.

Part 2. Where and How to Stream & Download Drake's New Scorpion Album

With subscribing Apple Music and Spotify Premium plan, you will have the rights to stream Scorpion by Drake online as you like and access to Drake Scorpion album download freely for downloading this album for offline listening. But if you don't pay for Apple Music subscription or you are only a free user on Spotify, things will be total different.

As a free Apple Music user, you can't access to Apple Music library even, while it could be much better using a free account on Spotify, since you can listen to Scorpion album online. But you still don't have the option of Drake's Scorpion download. More worse, you should keep in mind that even you are using a paying subscriber on Apple Music or Spotify, you can download Drake’s Scorpion album on selected devices for offline playback, because music tracks are encoded in special formats that can't be recognized in common MP3 music players. (Apple Music is encoded in M4P format, while Spotify comes with Ogg Vorbis format).

With the purpose of downloading Drake’s Scorpion as MP3 from Spotify and Apple Music, we can turn to the professional Drake Scorpion MP3 downloaders. If you would like to listen to Scorpion album on Spotify, you can use AudFree Spotify Playlist Downloader that is designed to download and convert Spotify Ogg songs to common MP3 files with ease. If you are using Apple Music, you can get help from AudFree DRM Audio Converter that can help you download and convert Apple Music M4P streams to DRM-free MP3 or other popular audio formats according to your needs.

Part 3. Tutorial: How to Download Drake Scorpion to MP3 Freely

You can drag and drop Drake’s Scorpion album to the conversion window of AudFree Spotify Music Converter. Or you can right click the Scorpion and choose 'Share' -> 'Copy Playlist Link', and then you can paste the link to the search box of AudFree and press the '+' button.

Click the menu bar to choose 'Preference' option, and AudFree will pop up the format window, in which you can set output format as MP3 or other audio formats, like FLAC, WAV, AAC, M4A and M4B. Besides, you can enhance the audio quality by setting the bit rate as 320 kbps.