If you are of Taylor Swift fan or a person who follows music trends, it is not difficult to find that Taylor Swift dominates the list on Billboard. Taylor Swift's new song, Anti-Hero leads No.1 on Billboard Hot 100. It's the lead single from her new album, Midnights, which was released on 21 October, 2022 and is peaking on Billboard 200.

Gained over 300 awards, and Taylor Swift is the most awarded female. Without a doubt, there are so many popular and pleasurable songs released by Taylor Swift. From 2006 to 2022, Taylor Swift released ten debut studio albums, including her self-titled Taylor Swift, Fearless, Speak Now, Red, 1989, Reputation, Lover, Folklore, Evermore, and Midnights. Today, let's focus on free Taylor Swift's albums and new songs MP3 download for offline listening to enjoy her endowment in country and pop music.

Today, let's focus on Taylor Swift albums and new songs download for offline listening to enjoy her endowment in country and pop music. 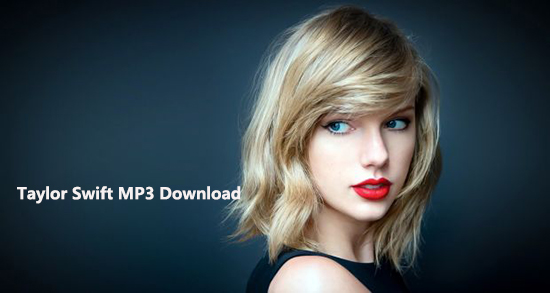 Plus, it's also an all-in-one Spotify music converter, with which you can convert Taylor Swift albums from Spotify to a wide variety of audio files, such as MP3, FLAC, WAV, AAC, M4A and M4B so that you can play Taylor Swift songs and albums on any device as you like.

There are six audio formats you can choose as the output format to export Taylor Swift songs. If you'd like to get Taylor Swift song MP3 downloads, you can enter to Preference -> Convert option to choose MP3 as the output format. Besides, if you are a free Spotify user, you'd better to adjust the bit rate as 320 kbps and other audio parameters to enhance the listening experience.

When all settings done, please simply click the big 'Convert' button at the main interface. And then AudFree Spotify Music Downloader will download Taylor Swift's songs to MP3 files so that you can play any album and song by Taylor Swift on any device and music player without Internet connection.

Born in Pennsylvania, Taylor Swift is not only an American well-known singer but also songwriter. As one of the leading contemporary recording artists, Taylor Swift won the award for the youngest Album of the Year and she is the first and only artist being the winner for both Best Country Album and Best Pop Album in Grammy Awards. One of the most special features of Taylor Swift's songs is that they're narrative songs about her personal life. After you have learned the tips on free Taylor Swift songs MP3 download, which albums and songs debuted by Taylor Swift you can't miss to download? Let's find the answer by introducing Taylor Swift albums one by one.

When you visit the Billboard 200 now, you'll find Taylor Swift's new album Midnights, the tenth studio album at the top in over 25 centuries. It is a concept album about nocturnal contemplation and returns to synth-pop.

Speaking of playing the best songs from this new album by Taylor Swift, all new songs in this album are recommended to give a try.

It's amazing to release two albums a year. Evermore is such an existence. Only five months after Folklore was released, Evermore was public, which blends alternative alt-rock, indie folk and chamber pop styles.

The album marked Swift's eighth consecutive No. 1 spot on the Billboard 200 chart. What's more, 'Willow', the lead single of Taylor Swift ninth studio album made her the first-ever actor to appear on both the Billboard 200 and Hot 100 charts at the same time.

To stream Evermore album, you can start with 'Willow', 'No Body', 'No Crime', and 'Coney Island' songs.

As the eighth studio album, Folklore album by Taylor Swift was released on July 24, 2020. It come out during quarantine after the outbreak of the COVID-19 pandemic. Folklore was regarded as "a collection of songs and stories that flowed like a stream of consciousness" by Taylor Swift.

Unlike previous works, this Folklore album explores new themes of escapism, empathy, nostalgia and romanticism. This album won Album of the Year at the 63rd Grammy Awards, making Swift the first female in history to win the award three times.

The best Taylor Swift songs in Folklore album could be 'Cardigan', 'The 1' and 'Exile'.

On April 26, 2019, no matter which streaming music or video service you are opening, you will see Taylor Swift new song is here, called 'Me!'. Featuring Brendon Urie of Panic! At the Disco, 'Me!' is the lead single from Lover album, the seventh album.

After the release of the 'Me!' music video, it has broken the Vevo record and YouTube record for most views in the first 24 hours for a lead female video. With hitting on over 65.2 million views, 'Me!' is the third most-viewed overall. On June 14, the second single 'You Need to Clam Down' is also available.

With more than 1 million copies sold, Reputation has been the 2017 best-selling album in the United States and it could be the No.2 in world's best-selling album of 2017. And the first single 'Look What You Made Me Do' broke some major records, such as the most 24-hour Spotify streams by any artist.

To listen to Taylor Swift Reputation songs, you can get started from 'Look What You Made Me Do', 'End Game', 'Delicate', etc.

Taylor Swift was born in 1989, and this album's title was named as the birth year of Swift, since this 1989 album was inspired by the pop music of the 1989s. This album is the first time that Swift starts to focus on pop music. As the 'first documented official pop album' described by herself, 1989 album combined with more special features, including synthesizers, drum programming, processed backing vocals, pulsating bass as well as guitars.

The best singles in 1989 album to enjoy could be 'Shake It Off', 'Blank Space' and 'Bad Blood', which topped in the US, Canada and Australia charts.

When it comes to the fourth album by Swift, the most two successful singles coming to my mind could be 'What Are Never Ever Getting Back Together' and 'I Knew You Were Trouble'. It's important to note that Red is the last album to feature a country. Red album is describing the emotions of Taylor Swift experienced the 'semi-toxic relationships'. Apart from involving original themes of love and heartbreak, Red also explored other topics from a more mature perspective, such as fame and pressure.

This is the first album that written entirely by Taylor Swift and it debuted at No.1 on the U.S, Billboard 200 chart. With the over 1 million copies sales for the first week, Speak Now became the fifth-biggest debut in history for a woman artist. With this Speak Now album, Swift expands on the country pop style and her lyrical themes start to include love, romance and heartbreak.

To play Taylor Swift Speak Now album, you can choose the following songs have a try firstly, including 'Sparks Fly', 'Dear John', 'The Story of US' and 'Last Kiss'.

Fearless is the second debut album released on November 11, 2008 and written and co-written by Taylor Swift herself. Fearless covers thirteen songs and five singles have been released from this album, which singles had glorious achievements. With over 3.2 million copies, Fearless has been the best-selling album in 2009 in the United States. In the Fearless album, Swift starts to extend her dominion beyond the country-music-loving red states.

The most popular songs in this Taylor Swift album could be 'Love Story', 'You belong with Me', 'Fifteen' and 'Fearless'.

Released on October 24, 2006, Taylor Swift is the first studio album with the self-title name, which focuses on country music. There are five singles from this album, including the lead single 'Time McGraw' about her and her senior boyfriend, 'Teardrops on My Guitar' as the album's best-charting track on Billboard Hot 100, 'Our Song' wrote in Taylor Swift's freshman year of high school talent show, 'Picture to Burn' reflecting feminism and 'Should've Said No' also hitting on the No.1 on Hot Country Songs.

These singles in the first Taylor Swift album are all recommended to have a listening.

Since albums by Taylor Swift are only available in Apple Music previously, there could be many Taylor Swift fans who listen to her songs and albums from Apple Music. Of course, if you only need to get Taylor Swift songs for offline listening on Apple authorized devices, the only thing you should do is to have an Apple Music subscription.

After following this article, you can successfully get Taylor Swift MP3 downloads from Spotify and Apple Music and start to listen to Taylor Swift all songs and albums, containing the new album Lover and new song 'Me!' anywhere.

How Many Songs Does Taylor Swift Have?

Does Taylor Swift Write Her Own Songs?

Yes. Taylor Swift as a song writer has written over 50 songs by herself.

How Many Albums Does Taylor Swift Have?

From the detailed introduction to Taylor Swift albums, the answer is ten.