It is beyond a reasonable doubt that Christmas is one of the most celebrated holidays all over the world. It's a time to visit far living relatives, attend parties, exchange gifts, and also seek divine intervention. Thanks to Pope Julius I, he chooses the 25th of December as a birth date for Jesus Christ.

On this day, people cannot do without Christmas songs, which can help people quickly get into emotions. The Christmas songs induce a sense of joy, laughter, and hope into these memories which make them worth remembering. So, what are your favorite Christmas songs? Jingle bells? Or whether you are looking for some classic or funny Christmas songs? 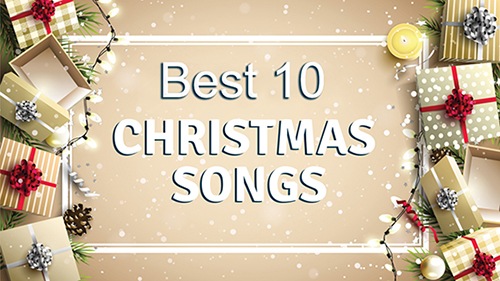 This Christmas song stands out among other Christian Christmas songs today. Franz Xaver Gruberand composed the melody in the early 19th century. Currently, the hymn features over 140 different languages making it one of the most popular Christmas songs of all time. It is precisely the reason why UNESCO declared it as an intangible cultural heritage in 2011. It brings with it the feeling of joy, relaxation, and peace when you sing or listen to it.

#2. All I Want for Christmas is My Two Front Teeth

This tune happens to be among the top funny Christmas songs. It's probably on your Christmas playlist, right? The Christmas song is dear to youngsters. Kids with missing front teeth especially during the Christmas season are a laughing stock. The song brings relief to the embarrassment from the laughter. If you would like to get more kids' songs, please read on this page: Top 10 Best Christmas Songs for Kids.

#3. We Wish You a Merry Christmas

From New York, USA, to the most remote urban Centre's, this is one of the most classic Christmas songs you will hear in the wake of the Christmas season. The song has a simple lyrics composition which makes it easy to understand and memorize. Well, it has its roots in England. But the original composer of the piece remains a mystery. Uniquely, this good wishful hymn remains captive to the ears despite this fact. The Spanish version of the song is something you do not want to miss out on during the Christmas season!

#4. Santa Claus Is Coming To Town

Do you still recall your best gift wish list for Santa on the eve of Christmas? Santa is the most cherished kids' friend during Christmas. John Frederick Coots and Haven Gillespie wrote the song in the 1930s. After being aired on Eddie Cantor's radio show in 1934, the tune became a Christmas hit. Since then has continued to attract much popularity on the Christmas playlist for many. Every kid believes Santa has something for them. The Carpenter version is the most famous of all.

The Christmas song's lyrics were written by a wine seller, from Paris, Placide Cappeau in the mid-19th century. Initially, the song was a Christmas poem, but with the help of Adolphe Adams, the poem was composed into a song. In the late 19th century the French song was translated by John Dwight to its current English version. Today, Celine Dion's version is the most popular of the song. This tune is purely a Christian Christmas song.

When a child is born is a top Christmas song. The original version of the hymn, “Soleado,” was done by Ciro Dammicco in 1974. Fred Jay did the English lyric which was later sung by a quite number of artists. Johnny Mathis's carol is the most popular. Even though the tune does not directly mention anything to do with Christmas, its content depicts the expectation of the birth of Christ.

#7. Do They Know It's Christmas

Back in 1984, this particular piece was a hit in the United Kingdom. Actually, it was the number one Christmas that year. Consequently, the song managed toping in 13 different countries. Its content, however, creates whole lots of ideas about holidays. It all depends on the listener.

#8. When Christmas Comes To Town

I am of the opinion that, the voices behind this Christmas music song are cool and sweat. What do you think about them? Alan Silvestri and Glen Ballard are the writers of the song. Matthew Hall and Meagan Moore performed the melody. It is particularly compassionate about children especially about their hopes for the coming of Santa.

Jingle Bells is tipped to be the most popular Christmas songs across the globe. It has continued to loom as a favorite Christmas hymn. Written by James Lord, this Christmas carol propelled him to becoming one of the songwriters in the Hall of Fame. The pitch and lyrics feel natural and amazing to a lot of people.

They say love isn't love until you give it away but giving it away on Christmas definitely is much more thrilling and special. George Michael wrote the last Christmas song in 1984. As of 2016, the song was featured as among the top ten all-time selling digital tracks record in the United States of America. It is an entirely epic piece. I'm sure you will love it.

Download Christmas songs today and enjoy the 'Christmas wave' with me. We wish you a Merry Christmas and Happy New Year!