Can You Play Album in Order on Spotify? Fixed!

As a great music streaming application, Spotify provides all users with millions of music and albums. Even if you are a free Spotify user, you are able to enjoy albums in Spotify anytime and anywhere. But one thing that often annoys free users is that they can’t play album in order on Spotify, but can only play songs from album in Shuffle Mode.

The official solution to unlock the ability to play an album in order on Spotify is upgrading to Spotify Premium plan. But some free users may feel that it’s not worth subscrbing to a Premium account just to play Spotify album in order. 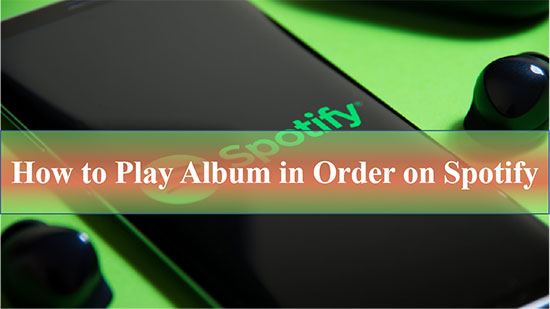 Part 1. How to Play an Album in Order on Spotify with Premium

If you are a free Spotify subscriber, you can only play albums on Spotify randomly on your PC or Mobile. But with a Premium subscription, you can unlock exclusive features such as offline play, unlimited skips and ad-free listening. More importantly, you can let Spotify to play album in order. In this way, it seems that the official method to play albums in order on Spotify is only available for Premium subscribers. But it works well. Please make sure your subscription hasn’t expired first, then follow the steps below to get started on your PC or mobile.

How to Play an Album in Order on Spotify for PC 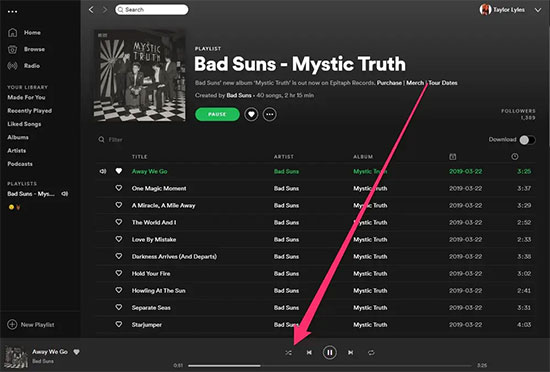 Step 1. Download and launch the Spotify application on your Windows or Mac computer. Open your favorite albums directly or search for any album you want to listen to, then double-click on the first song in the album.

Step 2. In the menu bar at the bottom of the page, you’ll see a shuffle icon that looks like two overlapping arrows. If it’s green, click on it to turn it gray to disable it. After that you can play any album in order on Spotify.

How to Play an Album in Order on Spotify for Mobile 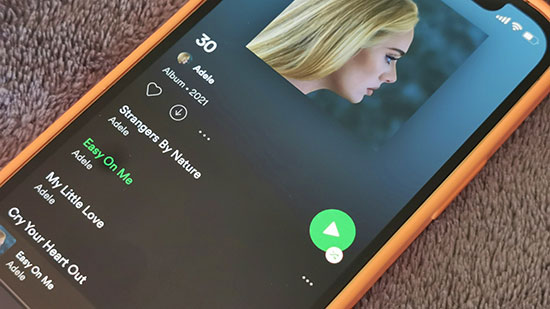 Step 1. Download and run the Spotify app on your Mobile. Go to the Your Library option at the bottom of the page, click on the Albums button so you can see all your albums, and then click on any album you want to play. Or you can just click on the search bar and search for your favorite album.

Step 2. Double click on the first song in the album and you will be redirected to a Now Playing page. See the column at the bottom of the screen and disable the shuffle button that looks like two overlapping arrows to turn it gray. This means you can play album in order on Spotify for Mobile afterwards without any problems.

Part 2. How to Play Album in Order on Spotify without Premium

As a professional and well-designed Spotify Album Converter, AudFree SpoDable is dedicated in downloading and converting Spotify albums to different formats such as MP3, AAC and other common and popular formats without Premium, then you can easily play Spotify album in order on all devices and players. What’s more amazing is that it can download album from Spotify in one click at 5X faster speed. What’s more, the original audio quality and ID3 tags of Spotify album will be will be preserved intact during the conversion process.

How to Play Album in Order on Spotify without Premium

After adding album on Spotify to AudFree SpoDable, click on the menu bar in the upper right corner and you will see the Preferences option, just click on it. Then a new conversion window will open and you will be able to choose the Spotify album output format. For example, you can convert Spotify to MP3 and other common format. Of course, other output parameters are also customizable in this window, you can set output channels, bit rate and other parameters to adjust Spotify album quality.

Step 3Play Album in Order on Spotify without Premium 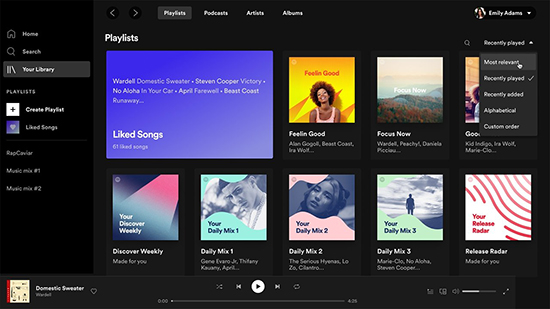 Q: Can I play an album for free on Spotify?

A: With the Spotify Free plan, you can play any Spotify album, even playlists and artists, but these can only be played in swing play mode. And Spotify free users can’t download albums on Spotify, you can only have this privilege when you become a Premium user or draw support from a Spotify album downloader.

Q: Is there a limit to Spotify album？

A: Although Spotify provides users with over 50 million songs to play at any time, Spotify does have a limit on downloading album. If you subscribe to Spotify Premium, then you can download and save up to 10,000 songs and albums to your library. And Premium subscribers can also download up to 10,000 albums for offline listening on five different devices.

Q: Why can’t I fully listen to an album?

A: Spotify free users can’t play an album in its entirety because you’ll get some recommendations between songs that will randomly play other songs. You can unlock more features only by subscribing to Spotify Premium. This also includes the ability to choose which albums you want to play and listen to any album in its entirety.

How to Play Album in Order on Spotify
AudFree uses cookies to ensure you get the best experience on our website. Learn moreGot It!