Spotify Lite vs Spotify - Which Is Better

Spotify is a popular music streaming platform providing millions of songs to users globally. With advancements in needs, features, and other things, applications have their lite versions. Like other apps, including Facebook, Twitter, and Instagram, Spotify also has released its "Lite" version. What is Spotify Lite? The version is similar to the original app, but with a few differences.

Spotify is a 100 MB app, whereas the Spotify Lite version only consumes 10 MB of space. Meanwhile, there're some other factors that distinguish the two apps. So this article will present a comparative study of Spotify vs Spotify Lite in terms of user interface, size, battery usage, etc.

Moreover, we recommend the best third-party tool to enable you to download Spotify songs to computer for offline listening without a Spotify subscription. Read the article and decide what you prefer, Spotify vs Spotify Lite. 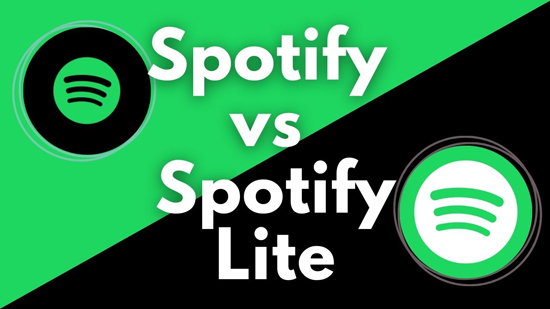 This section will discuss different factors, including battery usage, user interface, size, and sound quality, for a comparative study of Spotify Lite vs Spotify. But first, you need to know what Spotify Lite is?

Like other popular applications such as Facebook, Spotify also launched its lite version with some similar and a few different features and perks. Spotify Lite version is best for old devices as they have less storage and outdated operating systems. The lite version needs fewer data and device storage to help maintain battery life.

Spotify Lite offers all features similar to that of the Spotify original version. It allows users to search for their favorite music, songs, albums, and artists. The Spotify Lite version is only available on Android devices and has fewer functions than Spotify. Then it comes with the questions "is Spotify Lite better than Spotify", and "what is the difference between Spotify and Spotify Lite". Without further ado, let's get started.

The main difference between Spotify vs Spotify Lite is their sizes. Spotify Lite covers less space because of its small size. On the other hand, Spotify is larger and occupies more space. With the popularity of Spotify, you can expect things like Weekly New Discoveries and the latest Spotify hits. For this reason, you need more space on your device to enjoy the new features and perks of Spotify.

Another important factor for comparing Spotify vs Spotify Lite is the user interface. Both versions of Spotify have an easy interface. The only difference between the two is the placement of the tabs. Spotify shows the "Frequently played playlists" option in the first tab. At the same time, Spotify Lite has the option of "Recently played playlists" at the top of the screen.

The sound quality of both Spotify vs Spotify Lite is similar. Spotify is a larger app, so it can be unsettling when you're using more applications simultaneously, but it provides a better sound quality. Suppose you want to close other background applications, in this case, Spotify Lite will not stop and will provide continuous music with good quality.

Another factor between Spotify Lite vs Spotify is the data usage. Spotify allows its users to consume almost 45 MB of data per hour. Meanwhile, Spotify Lite has consumption limits, and users can set them for data usage. Whenever you use more than your set limits, Spotify Lite will warn you about it.

The Device Broadcast Status feature is only available in Spotify, and the Spotify Lite version does not support it. With this feature, other applications on your device will know your music taste and suggest songs and music accordingly. Spotify Lite cannot broadcast your activity, so in this factor, Spotify is the winner.

Spotify offers users the Spotify Offline Mode to listen to music offline with the upgraded subscription of Spotify Premium. But Spotify Lite does not offer any offline mode even if you have a premium subscription. So you can choose whether you need to have the offline mode of Spotify or not.

Spotify has a "Spotify Connect" feature which enables users to play Spotify music with other devices such as speakers and vehicles via Wi-Fi. This feature is not available in the Spotify Lite version, so if you want to enjoy Spotify music, you must choose Spotify over Spotify Lite.

Part 2. Spotify vs Spotify Lite: Which Is Better

You are now aware of features, benefits and perks of Spotify, as well as its lite version, and take a detailed look at the difference between Spotify and Spotify Lite. The given comparison shows that Spotify Lite has more accessibility than the original version. It is small, consumes less battery and almost all features are similar to the original app. It's time to decide which is better, Spotify or Spotify Lite?

But Spotify updates users with New Discoveries and major hits, and it also has the offline mode of listening, which Spotify Lite lacks. Spotify Lite is best suited to older devices with weaker operating systems. Still, music lovers who want all the features should not rely on it. Comparatively speaking, with its original version, Spotify is better than the lite version.

Part 3. Bonus Time: How to Listen to Spotify Music Offline

Whether you consider Spotify better or Spotify Lite, you will need to listen to Spotify music offline with its premium subscription, but the monthly subscription fee is really a lot of money, isn't it? In this event, try AudFree Spotify Music Converter as it is the best choice for downloading Spotify music and converting it to local files so that you can listen to them offline for free whenever and wherever possible.

It is worth mentioning that this well-designed tool can convert Spotify to MP3, FLAC, WAV, AAC, whether you are a Spotify Premium user or not. What's more, it retains 100% original audio quality of Spotify songs and downloads all types of Spotify music to your Windows or Mac computer. As a result, you have the right to enjoy your most-liked songs from Spotify offline as often as you like without a subscription.

Downloading music from Spotify via AudFree Spotify Music Converter is easy and simple. Follow the given step-by-step guide to getting Spotify downloaded and listening to it offline.

Remember: Ensure to download and install AudFree SpoDable on your computer.

You can copy the link to the song and paste it into the search bar at the top, then press the '+' tab next to it. Or it is possible to drag your favourite Spotify music directly into the conversion window of AudFree SpoDable.

After adding the songs, tap the menu icon at the top and click on Preferences > Convert option to set the output format of your Spotify playlist. Generally, you can select the audio format of the song as MP3, M4A, AAC, etc. If you need to set output parameters such as sample rate, channel and bit rate, you can also do so in this window.

Once set up, click the Convert button in the bottom right corner to start downloading Spotify music. When all Spotify songs have been downloaded, you can find them in the "Converted" folder at the bottom, or you can navigate to your computer's local folder. After that, you can listen to Spotify offline without Premium as you wish without any restrictions.

With the deep comparison of Spotify Lite vs Spotify, we learn that they are not all similar and have some major differences. Spotify Lite is a good option for people having older devices and weak operating systems to enjoy Spotify playlists, but it can't beat the level of the original Spotify version.

In fact, choose Spotify or Spotify Lite depending on your own circumstances, just go for the one that suits you best. Besides, if you want to listen to Spotify music offline without a subscription, try AudFree Spotify Music Converter, it will be an indispensable helper for you.

Spotify vs Spotify Lite Comparison 2022
AudFree uses cookies to ensure you get the best experience on our website. Learn moreGot It!