Nowadays, life has become very fast. People don't have time to read physical books, and even if they have the time to read the book while they are on the go, they don't have the space to carry books. So, audiobooks have gained a lot of popularity recently. You can listen to this anywhere you want; you don't focus because you have a narrator reading it for you. You can listen to these while on the run, doing exercise, while doing work, etc. 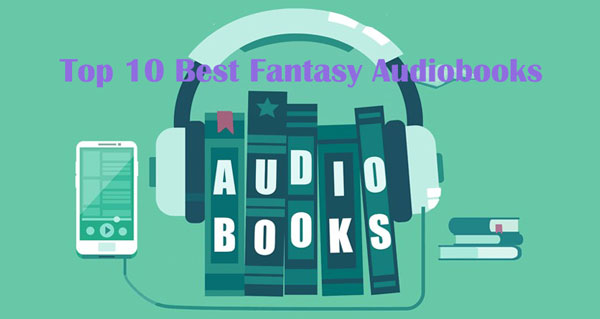 If you want to give it a try, fantasy books can be a great start to get your interest developed. Here we have curated a list of 10 best fantasy audiobooks for you. In the end, I will also introduce a small trick on how to listen to these audiobooks in any format on any device for free.

The First Law is one of the best fantasy novels written by British author Joe Abercrombie. It is a trilogy and three stand-alone. Set in an epic fantasy world at war, the First Law series is reminiscent of medieval-era Europe and the Mediterranean world. All the characters under Abercrombie's touch is so arounded and full of depth.

The Wheel of Time, written by American author James Oliver Rigney Jr., is a series of high fantasy novels, which portraits an epic fantasy series of our generation. Kate Reading as a female narrator and Michael Kramer for the male narrator, both experienced narrators, take turns to narrate the story from chapter to chapter.

Red Rising is a coming-of-age story about oppression, resistance, and freedom on Mars. It is known as one of the most exciting science fiction series of the last decade. Tim Gerard Reynolds narrates this fantasy audiobook.

Name of the Wind is an outstanding audiobook about the legendary hero Kvothe. The first part of The Kingkiller Chronicles trilogies. The greatest version of this fantasy audiobook is written by Patrick Rothfuss and is narrated by Degas.

Written by the American author Brandon Sanderson, the Stormlight Archive is another great series of epic fantasy novels. Planned as a ten-book series, the first novel was published in 2010. Four novels and two novellas have been published until 2020. This audiobook is narrated by Kate Reading.

The Gentlemen Bastards is narrated by Micheal Page, and he narrates the story of Locke Lamora and his friends. The graceful British accent and voice acting skills will take you into the real world. Gentleman bastards are one of the great fantasy audiobooks.

Narrated by James Clamp with his stylish melody voice, The Broken Empire is a story that starts with two innocents raped, murdered, and ends with the rapist and murderer becoming a martyr to save the world. It is also one of the best fantasy novels that have been the best seller at one point.

The story begins with Sabriel raised a recently dead rabbit. A mythical creature enters Sabriel's residence in Waverly College and terrifies all of the girls. It was narrated by Tim Curry, the best-known narrator for audiobooks and many animated series.

Audible is no doubt the best platform for listening to audiobooks and download audiobooks. It also provides audio versions of magazines and newspapers. This platform is developed by Amazon, which is the best in its own league. The best part of audiobooks is that it doesn't require your eyes to gain knowledge; instead, you can just listen to these books and work on other things to make your time productive. People often go for fantasy audiobooks after reading the best fantasy audiobooks review.

however, the Audible books are encrypted in AA or AAX formats, which means you may not be able to listen to those fantasy audiobooks on any device easily. Therefore, we need to some tools to help unencrypt them. AudFree Audible Converter is the best tool you can find on the market to help you achieve that goal. You can also use it to download and convert Audible to MP3 files or other audio formats. It is such a great tool that it retains all original sound quality along with all the ID3 Tags.

Here now we discuss the steps about how to download and convert those best fantasy audiobooks to MP3. Please download the free trial version of AudFree Audible Converter for Windows or Mac as well as the iTunes app. 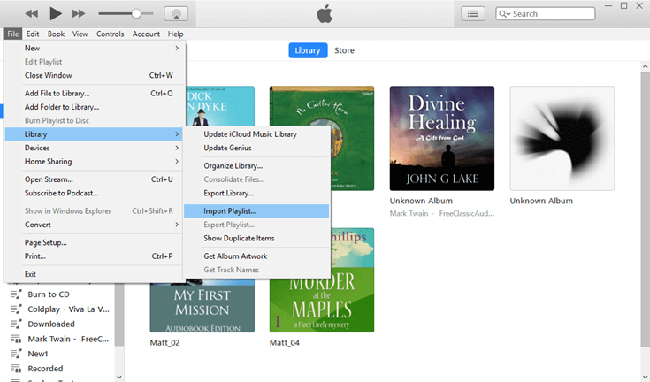 Once you open up iTunes, you can access the 'My Audiobooks' menu. Then go to the 'File' icon, click on it then open the 'Library'. Next, click on the 'Import Playlist' button option to stream Audible books.

At this step, you can use the 'Load iTunes library' button from the bottom-left corner to add the Audible fantasy books you wish to convert to MP3.

Once imported, click the 'audio' icon and choose your desired output format, MP3. You are free to other parameters like audio codec, channel, bit rate, and edit information such as title, artist, cover, year, and much more.

Now click the 'Convert' button at the lower-right corner of the interface to start downloading and the conversion process at 30X speed. It will unencrypt the Audible files and save them to MP3 files locally on your computer. Once the process is complete, you'll be able to put Audible books to an MP3 player for offline playback.

In this article, you get to know about the top 10 best fantasy audiobooks on Audible and also the best converter available on the market to convert audiobooks. Audible Audible Converter is a professional tool that you can download to convert Audible and iTunes audiobooks as well. Get the free trial to experience it full features now!

10 Best Fantasy Audiobooks on Audible
AudFree uses cookies to ensure you get the best experience on our website. Learn moreGot It!