How to Play Spotify on Amazfit Stratos or Pace

Nowadays, we can do so many things with a smartwatch even if we ditch our phones. For example, a sportwear smartwatch can help us keep track of our health and training, or we can listen to music on smartwatch with Bluetooth headphones while working out.

Besides smartwatches from well-known brands like Apple Watch, Samsung Galaxy Gear, or Fitbit, Amazfit is also a rising star in this field and the Amazfit Stratos and Pace are two popular options among customers. For people who just got a new Amazfit watch or who are considering getting one, they might have some similiar questions such as "Can we play Spotify on Amazfit" or "How to listen to music on Amazfit".

You can control Spotify music playback on your phone through Amazfit watch, and some watches like Amazfit Stratos and Pace have storage to store MP3 music files for offline listening. Therefore, in this post, we will show you the detailed steps on how to download Spotify to MP3 so that you can listen to Spotify on Amazfit Stratos or Pace. 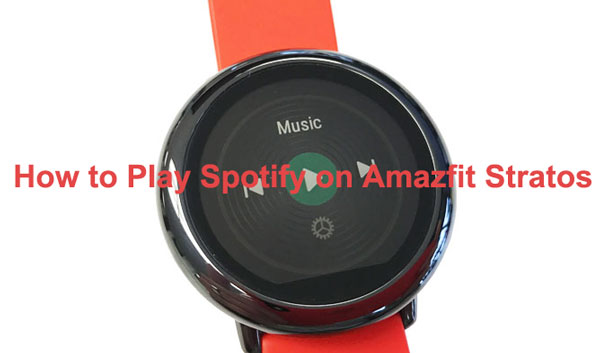 According to Amazfit, it is possible for users to transfer and play music on your Amazfit Pace or Stratos smartwatch. The supported music file formats are MP3 and M4A. This has give us some clues that we can actually download Spotify to MP3 or M4A and then we'll be able to play Spotify on Amazfit Stratos or Pace easily. So how can we do that exactly?

Firstly, here we meet the AudFree Spotify Music Converter, a powerful tool proficient in downloading Spotify songs to local music files and convert them to MP3, M4A, FLAC, and other commonly used audio formats. Besides, there will be zero quality loss during the downloading and converting process, and all the ID3 tag information such as artists, titles, genre, album art, will also be preserved in the output files.

It is worth mentioning that no Spotify Premium account is needed to download music using AudFree Spotify Music Converter. This professional software offers a free trial for Mac and Windows computer, and if you use it on Windows computer, you can experience the 5X downloading the covnerting speed. This way, you can get Spotify music downloaded for you Amazfit Stratos or Pace rapidly and effortlessly.

Part 2. How to Play Spotify on Amazfit Stratos/Pace - Detailed Steps

With the help of this smart tool, it is simple to get Spotify on Amazfit following the steps below. To begin with, please download the right version of AudFree Spotify Music Converter on your computer and the Spotify desktop app as well.

Mac users please find the 'AudFree Spotify Music Converter' on your laptop system to open settings window. Windows users just go to menu from the upper-right corner and select'Preferences' > 'Convert'. Here you can select to outout format as MP3 or M4A for Amazfit Stratos or Pace. To save storage, we suggest you select MP3. And you can define other output parameter such as sample rate and bit rate as you like.

Click the 'Convert' button and the AudFree program will start running at high speed to download and convert Spotify to MP3 or M4A. Wait until it finishes, then you can open the history list and locate the download Spotify music files in the output folder, ready to transfer them onto the Amazfit Stratos or Amazfit Pace.

Step 4How to upload music into Amazfit Stratos 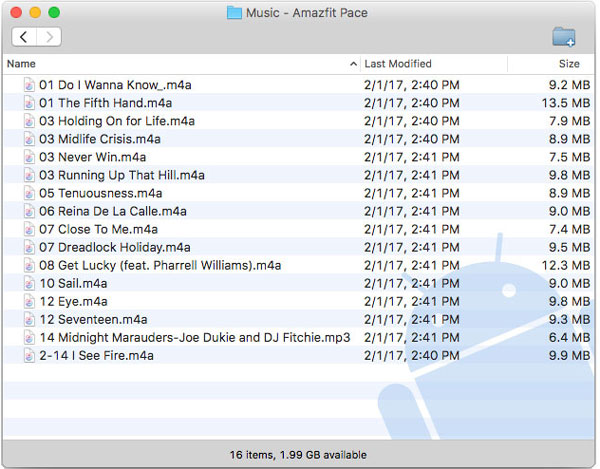 To transfer and play Spotify on Amazfit Pace or Stratos smartwatch, you will firstly need to connect your Amazfit watch to the computer via the USB cable and charging base. Once the transfer completes, you can adjust volume level and play mode through playback settings on the Amazfit watch and your Bluetooth headset.
Windows PC: Open the device appears on the computer and find "Music" file folder. Directly copy and paste the offline Spotify downloads into this "Music" folder. Then disconnect properly.
macOS: Mac users need to download and install "Android File Transfer" for Mac. Then open Android File Transfer from "Applications" folder and find the "Music" file folder shown. Directly copy & paste / drag & drop the Spotify music files into the "Music" file folder.

Part 3. More about Amazfit Stratos and Other Smartwatches

Though there is not yet the Amazfit Stratos Spotify app, the workaround introduced above works the same to help you enjoy Spotify on Amazfit Statos offline and help save battery life. Now let's take a look at some more concerning information which you might be interested in about Amazfit Stratos and Amazfit Pace.

How much storage does Amazfit Stratos have?

The internal storage space of the Amazfit Stratos 3 is about 1.9GB, suggesting that it can store approximately 380 songs based on 5M per song.

Which music streaming playback can you control on Amazfit?

Spotify on Amazfit Stratos or Pace
AudFree uses cookies to ensure you get the best experience on our website. Learn moreGot It!