When entering to Billboard website, I get a real-time music news that the Italian singer Andrea Bocelli's Si album hits No.1 on the Billboard 200 album chart in place of 'A Star Is Born' soundtrack by Lady Gaga & Bradley Cooper.

The Si is the new album by Andrea Bocelli released on 26 October 2018 as the sixteenth studio album via Sugar/Decca Records/Verve Label Group. It is Andrea Bocelli's first album of original material and makes him achieve his first number one album with total 123,000 selling copies over a week in the United States.

Being eager to listen to classical music in Andrea Bocelli Si album on your portable devices or music players, just read on this article to get shining tips on downloading Andrea Bocelli songs as MP3 while showing more detailed information about Andrea Bocelli and the Si album. 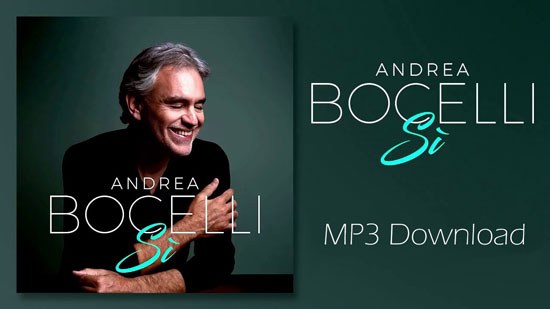 Part 1. Everything We Know about Andrea Bocelli and Si Album

Have you heard one sentence that 'if God would have a singing voice, he must sound a lot like Andrea Bocelli', which is from Celine Dion to acclaim Andrea Bocelli, the well-known singer, songwriter and record producer. With the world's beautiful voice, Bocelli has created countless beautiful music for the world to explore, including 15 solo studio albums with the perfect blend of pop and classical music, three greatest hits albums, nine complete operas, etc.

Andrea Bocelli has made great contributions to classical music, who has been bringing classic music to the top of the international pop charts. There is no doubt that his new album, Si, is a huge achievement with 25.2 million albums sold in the U.S. according to Nielsen Music. Si album is made up of 16 songs, a part of them are featuring some of the hottest musical stars.

The first collaboration between Ed Sheeran and Andrea Bocelli is the 'Perfect Symphony' in 2017. Now, in the Si album, they duet 'Amo soltanto te' with a new track co-written by Sheeran and Tiziano Ferro. The pop singer Dua Lipa appears in the 'If Ony' song while 'We Will Meet Once Again' features Josh Groban and 'Ave Maria Pietas' features Aida Garifullina. What's more, his 20-year-old son, Matteo Bocelli also duets with Bocelli on 'Fall on Me'.

Now, you will be able to find, stream and listen to Andrea Bocelli new album, Si, via Spotify app as below:

When it comes to Andrea Bocelli Si album stream and download, the first place we will think of would be music streaming services. You can listen to Andrea Bocelli songs in Si album on Apple Music, Amazon Music, Spotify, YouTube, etc. You should know that there are some preconditions to access to Si album in some streaming sites, like Apple Music, you should subscribe its paid plan for certain money per month. Besides, almost all music sites require users to pay subscription fee to get offline playback feature, including Spotify, which allows users to free access to its music library.

However, even if you upgrade to paying account, you can only download Andrea Bocelli Si album with built-in DRM protection, which prevents Bocelli fans from playing Bocelli songs on favorite devices. Why not to look for a third-party software, such as AudFree Windows Spotify Playlist Downloader (for free or premium Spotify users) or AudFree Windows Apple Music Converter (for Apple Music subscriber) to help you download songs in Si as MP3 from Spotify and Apple Music for better playback on any device.

With the link of Andrea Bocelli Si album, you can directly paste this URL to the search box of AudFree and click 'Add' button to import Si songs. Or you can drag and drop Bocelli songs to the main interface after Spotify launched.

To get Andrea Bocelli MP3 Si album, please enter to 'Preferences' -> 'Convert' section to open the setting window, in which you need to define output format as MP3. Of course, you can adjust other output audio parameters, like bit rate, sample rate, audio channels, etc.

After customization, please simply tab the 'Convert' button at the bottom-right corner, which is different from the one in step 2. AudFree Spotify Music Converter will start downloading and converting the Si album from Spotify to MP3 files. After conversion, you can click the 'history' icon to locate well-downloaded Bocelli's latest songs.

Now, you can get Andrea Bocelli Si MP3 album in the local music folder on your computer. You are free to transfer Si songs to any other popular devices for listening offline. By the way, if you are using Apple Music, you can refer to this source page: How to Convert Apple Music to MP3 to extract Andrea Bocelli MP3 songs from Apple Music with ease. Hope you have a nice classical music trip with Si album by Bocelli.