Q: I have tired all ways to install Spotify on Raspberry Pi, but all ended in failure. Since there is no Spotify for Linux version on ARM so I turn up to use Spotify web player in Raspberry Pi. But no matter which web browser I used, Firebox or Chromium, I met the same consequence that it redirect to main page of web browser immediately. Is there any other method I can utilize to play Spotify music on Raspberry Pi 3 or 2?

Most of you might have encountered the same obstacle when using Spotify on Raspberry Pi since Raspbian, the dominant operating system on the Raspberry Pi isn't compatible with any program out of the box, including Spotify app. Is there no way to listen to Spotify music on Raspberry Pi? Not really! In this article, we will introduce two effective solutions on how to make Spotify play on Raspberry Pi with ease. 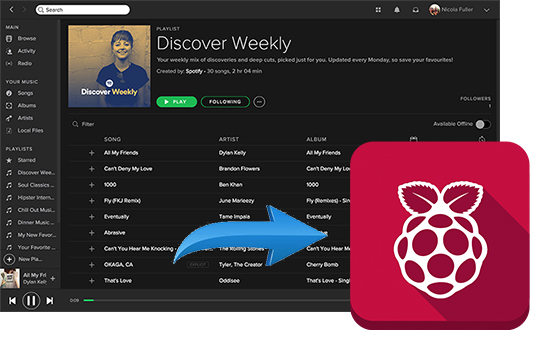 Part 1. How to Install Spotify on Raspberry Pi via Kodi

The first way to play Spotify music on Raspberry Pi we show here is to get assistance from Kodi, which is a media center software. Kodi can run on tops of other systems, like OSMC or LibreElec and allows users to listen to and stream thousands of media content from different streaming music and video sits, such as Spotify, YouTube, Netflix, etc. Let's see how it works.

Just choose a new SD card or flash OSMC to get started with the Kodi media center software. After you have completed the welcome wizard of OSMC, it's time to install Spotify on Kodi. Since I have already wrote the detailed tutorial to get Spotify on Kodi, here I will not repeat it again. Before following the previous source page, please make sure you have enabled SSH, which works to send the repository file to your Raspberry Pi. 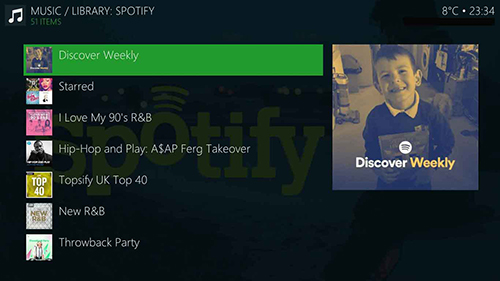 When all things have done, you can navigate to the 'Music' option from the main menu and find Spotify in 'Music Add-ons' to play Spotify music via Kodi on Raspberry Pi without any restriction.

Part 2. How to Listen to Spotify Music on Raspberry Pi - Better Way

The above way works but it seems a difficult task for newbies to make it available. As a result, we will still introduce alternative way to play Spotify music on Raspberry Pi. Because of Raspbian operating system, Raspberry Pi can enables users to listen to music, play games, watch videos, etc. via programs in the box. So the second method is to use AudFree Spotify Playlist Converter to download and convert Spotify music for playing on Raspberry Pi.

AudFree Spotify Music Converter is specialized in downloading music and playlists from Spotify and convert them to FLAC, WAV, AAC, M4A, M4B or MP3 with free or paid Spotify account. With the help of this smart tool, you can get local Spotify files and transfer them to Raspberry Pi for playback via supported media player freely.

The following is the detailed guide to use AudFree Spotify Music Converter to convert Spotify music and playlists to Raspberry Pi compatible audio files. This smart tool is available for both Windows and Mac operating system, you can choose the right version to install on your computer. Notes: The free trial version has the one-minute conversion limitation, you need to purchase the full version to unlock it.

If you are using a free Spotify account, you highly recommend to click the top menu bar to choose 'Preferences' > 'Convert' option to open the setting window. In the pop-up window, you can set the set the bit rate as 320 kbps and sample rate to 44,100Hz to enhance the output audio quality. Besides, to get better audio quality, you can try to set output format as FALC or WAV.

Now, you just need to start to click the 'Convert' button at the bottom-right corner of the main interface, the downloading process can be launched for a while. You can see the real-time conversion speed near the added Spotify files. When one Spotify music was downloaded completely, you will see the number will increase in the 'history' icon.

How to Play Spotify Music on Raspberry Pi
AudFree uses cookies to ensure you get the best experience on our website. Learn moreGot It!