How to Play Apple Music on Google Home - 2 Ways

Up till now, November 2020, Google Home users are able to ask Google Assistant to play Spotify, YouTube Music, Pandora, Deezer directly. But Apple Music subscribers might be disappointed to find that Apple Music is still not an option on the list, since there was news about the team-up of Google Home and Apple Music in early 2019 after Apple Music arrived on Amazon Echo in 2018. 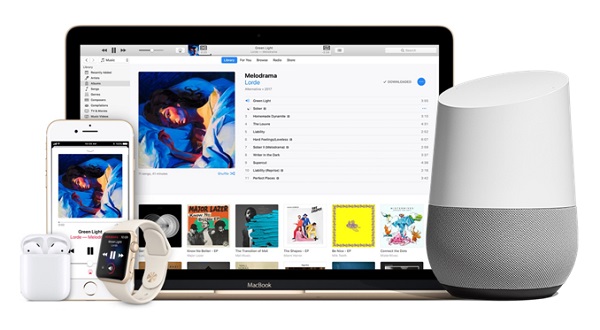 Method 1. How to Play Apple Music on Google Home with Voice Commands

First of all, the first method introduced here requires us to download Apple Music to actual music files locally. However, the Apple Music we download with a subscription is encrypted by Apple FairPlay, so we cannot transfer them directly to Google Home for offline playback. Under this circumstance, we'll need the help of third-party software - AudFree Apple Music Converter, a professional tool well designed to help users completely remove all limitations on Apple Music and convert Apple Music M4P to MP3, WAV, AAC, FLAC, or other common audio formats.

Without touching the audio quality, AudFree Apple Music Converter can run at 30X speed during the downloading and conversion process. What's more, all the metadata of the media will be preserved such as artist, title, genre, year, and album art, so when you ask Google Assistant to play Apple Music, it can accurately identify the song you request. This excellent software offers a free trial of Windows and Mac version for you to convert 1 minute of each song. You can download and use it now to see how it actually works to get Apple Music on Google Home.

I. How to Download and Convert Apple Music for Google Home

Once all the Apple Music songs are loaded into AudFree, click on the 'audio' icon to open the settings window where you can select the output format as MP3, AAC, M4A, WAC, or others. To customize your Apple Music, you can also set the codec, channel, sample rate, or bit rate accordingly.

II. How to Stream Apple Music on Google Home with Voice Commands

With the downloaded Apple Music files at hand, you are ready to stream Apple Music to Google Home with access to voice control. A traditional way to do it would be uploading the music files to the music library of a free Google Play Music account. But since YouTube Music will fully replace Google Play Music by end of 2020, we will show you how to upload your Apple Music to the YouTube Music library instead, which also works to help us achieve the same goal. Now let's take a look at these final steps.

Step 1. Upload Apple Music to YouTube Music library. Visit music.youtube.com in the Chrome browser and sign in with your Google account. Simply drag and drop the Apple Music folder to any page on YouTube Music. Or you can click on your profile picture and select 'Upload music'.

Step 2. Set up Google Home. Once the uploading finishes, open Google Home app on your mobile devices. Confirm the device and Google Home are connected to the same Wi-Fi network. Tap "Get Started", and then choose the YouTube Music account to link with Google Home. Tab OK.

Here's a video tutorial that shows you how to play Apple Music on Google Home with method 1 step by step.

Method 2. How to Connect Apple Music to Google Home via Bluetooth

If that doesn't bother you, then please follow the steps below on how to play Apple Music on Google via Bluetooth:

a. Pair from Google Home app: Open the app, tap the devices you want to pair, and go to 'Settings'. Scroll down to 'General Settings' and select 'Paired Bluetooth devices' > 'Enable Pairing Mode'.

b. Pair from Bluetooth settings: Go to 'Settings' > 'Bluetooth' and turn it on. Then tap the name of your Google Home speaker. 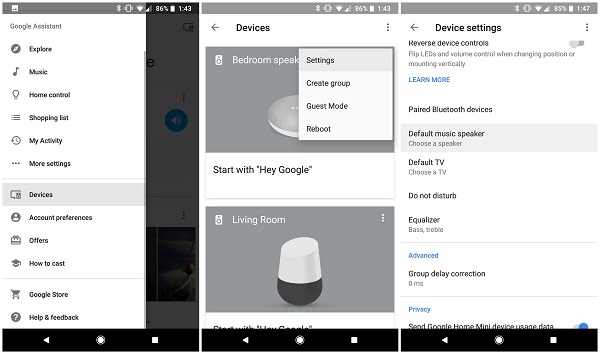 Click the 'Start' button, select 'Settings' > 'Devices', and turn on Bluetooth. Tap the name of your Google Home speaker under 'Other devices' to connect.

Click the Apple menu, go to 'System Preferences', and turn on Bluetooth. Then select the name of your Google Home speaker to connect.

The rest is basically the same as the pairing step 2&3 above.

Google is adding more and more members to its 'smart speakers and displays' family, including Goggle Home, Google Home Mini, Google Home Max, Nest Hub, Nest Hub Max, and Nest Mini. They allow you to listen to music, podcast, audiobooks, or find a recipe in the kitchen using voice commands. Thanks to Google Assistant, the built-in voice-controlled intelligent personal assistant service, it's easier for us to play music, set alarms, listen to the news all via voice commands on Google Home.

2 Ways to Play Apple Music on Google Home
AudFree uses cookies to ensure you get the best experience on our website. Learn moreGot It!