How to Cast Apple Music to Chromecast Audio

Chromecast Audio is a variation of the second-generation Google Chromecast designed for use with audio streaming apps. It's a small dongle that can be connected to smart speakers or mobile devices for streaming music through Wi-Fi. As for now, it has native support for many popular music streaming sites such as Google Play Music, YouTube, Spotify, and Pandora, except Apple Music.

That's why you won't find any option to cast Apple Music to Chromecast within the app itself. Luckily, there are some alternative ways to play Apple Music on Chromecast Audio for playing on other devices. How? Read on the following tips. 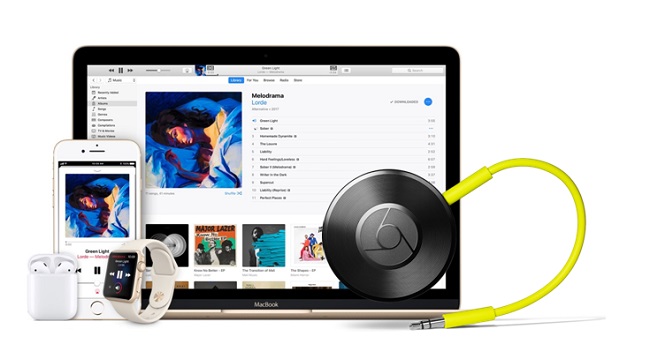 As there's no official support to stream Apple Music straightforward via Chromecast Audio, you may wonder whether it's possible to download the songs firstly and then cast Apple Music tracks to Chromecast as you do with the local songs. Unfortunately, you can't. That's because unlike the common music files, Apple Music songs (also known as M4P) are encrypted by DRM, due to which only authorized devices are allowed to play Apple Music tracks.

Because of DRM, you can't even share the songs to others or burn Apple Musicinto CD. Therefore, before making Apple Music work with Chromecast, the most important task is to find out a tool that can completely remove DRM from Apple Music M4P songs.

Here, we can meet AudFree Apple Music Converter, which is the most highly-rated app that can strip off DRM protection from Apple Music in just one click. With this reliable solution, you can easily convert any DRM-locked Apple Music from M4P to MP3, AAC, M4A, WAV, FLAC, etc. with all metadata info and ID3 tags preserved. Once the DRM is removed permanently, Apple Music can connect to Chromecast Audio without limit, even if you unsubscribe Apple Music service someday.

Once you installed the free trial version of AudFree Apple Music, you can follow the instructions below to begin removing DRM from Apple Music and casting the songs to Chromecast Audio for playback on any device. It's important to note that it can only convert one-minute song of each track. You need to purchase it unlock this limitation.

Step 1Save Apple Music songs offline in iTunes
As AudFree DRM Audio Converter only works with the completely downloaded Apple Music songs, you are required to download Apple Music tracks offline onto your computer before removing off the DRM. To save the songs offline, you should go to "For You" or "New" section in iTunes to browse Apple Music library. When locating the target song, album, or playlist, click on the "..." icon to add it to "My Music" or "Playlist". After that, go to "My Music" tab to find the newly added music file and then click the cloud icon with a downward arrow to store the song offline.

Once the songs and playlists are imported into AudFree Apple Music Converter, simply click the 'audio' icon next to 'Convert' button and then you'll get the chance to change the output format and audio parameters. Currently, there are 6 output formats including MP3, M4A, AAC, FLAC, WAV and M4B. No matter which audio format you are selecting, you can customize the parameters like codec, channel, sample rate, bit rate, etc. In order to make the songs playable on Chromecast, you need to choose output format as MP3 as it's widely supported by most players.

Press the 'Convert' button from the bottom right corner and AudFree DRM Audio Converter will start converting the Apple Music songs to DRM-free format at up to 30X faster speed. Once converted, you can freely transfer the tracks to Chromecast Audio by following the steps below.

Quick Guide: How to Play Converted Apple Music on Chromecast 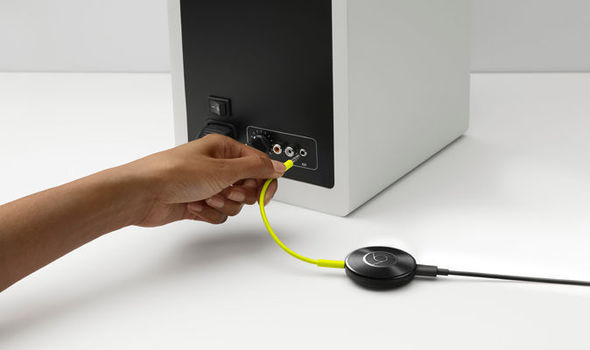 To cast the converted Apple Music songs to Chromecast on Mac or PC, Google Chrome offers the easiest solution for you.

Step 1. Plug in the Chromecast Audio device into your speaker via the 3.5mm AUX port. Make sure they are sharing the same Wi-Fi network.

Step 2. Open Chrome browser on your computer. Then drag one of the converted Apple Music tracks to Chrome and start playing it.

Step 3. Go to Chrome settings menu and press 'Cast' and the songs will be automatically streamed to the speaker via Chromecast.

Step 2. Transfer the converted Apple Music audios to the mobile device and start playing the songs.

Step 3. Click the 'Cast' menu within the app, and then the Apple Music will be synced to the connected speaker on the same WiFi network.

Have fun with Apple Music and Chromecast. If there is something wrong happened when doing this process, please be free to write down your issues on the comment area and we will give possible assistance to you as soone as possible

How to Stream Apple Music to Chromecast Audio
AudFree uses cookies to ensure you get the best experience on our website. Learn moreGot It!