How to Play Apple Music on PS4 [PlayStation 4]

PS4, also known as PlayStation 4, is a popular home video game console developed by Sony. Apart from playing games, one of the most well known features of PS4 is its ability to play movies and music, thanks to the built-in "Media Player" app.

Does PS4 have Apple Music? As for now, PS4 only works with Spotify music and doesn't natively support other streaming music services yet, such as Apple Music. Luckily, there are some alternative ways to help you get Apple Music on PS4 nevertheless. Follow this article to listen to Apple Music songs in the background while playing PS4 games.

Firstly, you need to be clear that only Spotify is the default music service within PS4. In other words, the PlayStation 4 does not support Apple Music streaming. Since PS4 allows us to sync local music tracks from USB, you may wonder why can't we just transfer the Apple Music songs to USB and connect them to PS4 like we do with other local songs?

The truth is that Apple Music songs are different from the normal songs we get online. They are protected by digital rights management and encrypted in a special format called M4P, which can only be supported by authorized devices. While PS4 supports common audio formats such as MP3, AAC, FLAC and M4A. In this case, you cannot stream Apple Music to PS4 directly.

As mentioned above, when you move Apple Music M4P songs to USB drive or other device, you will get "file format not supported" error. Therefore, in order to upload Apple Music to PS4 via USB, we need to firstly convert Apple Music songs to PS4 compatible format with the help of some third party music converters.

You can turn to AudFree Apple Music Converter, which is designed to help you completely remove the Apple Music format restrictions while converting M4P songs to MP3, WAV, AAC, etc. This way, you can download Apple Music to PlayStation 4 without any problem. In addition, this tool can maintain the original quality and ID3 tags of Apple Music. Apart from Apple Music, it is also suitable for other audio genres such as iTunes songs and audiobooks, Audible audiobooks, etc.

How to Play Apple Music on PlayStation 4 via USB

After installing AudFree Apple Music Converter on your Mac or PC, launch it by clicking the software icon. Then you can load the Apple Music songs into the converter either by clicking the first 'Add' button or dragging the files directly from iTunes music folder.
Note: To make the conversion process smoothly, please make sure you've already authorized your iTunes with Apple ID to play the songs. Otherwise, some problems may occur during the conversion.

Once the Apple Music songs/playlists are imported into AudFree Auditior, click the 'Format' icon near 'Convert' button to choose the output format as MP3, M4A, AAC, FLAC, WAV or M4B, and other settings including audio codec, channel, bit rate, sample rate, etc. For Apple Music to be compatible with PS4, you are suggested to set output format as MP3.

Click 'Convert' button from the bottom right to start converting the Apple Music songs to MP3. It will proceed at up to 30X faster speed on Windows or Mac computer. After that, you can locate the unprotected Apple Music tracks on the destination folder. 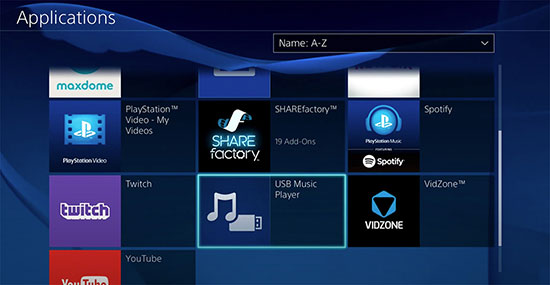 1. Connect USB flash drive to your computer. Then copy the well-converted unprotected Apple Music songs to USB from the destination folder. In order to make it easier to find, you can create a folder named 'Apple Music' on your USB drive.
2. Insert the USB flash drive into your PS4's USB port and select the Library icon in the PS4 content area, it will automatically detect and display the connected USB drive.
3. Go to the content area and click on the "USB Music Player" button. Then highlight a specific Apple Music song and press the X icon to automatically play Apple Music on PS4.

Part 3. How to Get Apple Music on PS4 with DLNA Online

Do you use DLNA? It refers to the Digital Living Network Alliance technology that provides home networking capabilities for many home audio and video devices, including computers, game consoles, digital cameras and mobile products. It allows music, video and pictures to be shared between compatible devices over a home network.

If you use an iPhone, you can also stream Apple music to PS4 via a DLNA server. If you don't have such a server, you can find it and other similar apps from the App Store. Please note that this method relies on the internet and the DLNA media server needs to be connected to the same network as your PS4 system.

How to Listen to Apple Music on PS4 with DLNA

Step 1. Launch the "Media Player" app on your PS4, you can do this by going to PlayStation Store > Apps > Catalog.

Step 2. Select your DLNA server on your iPhone. If not, you can download iMediaShare as a DLNA server from the iPhone App Store. 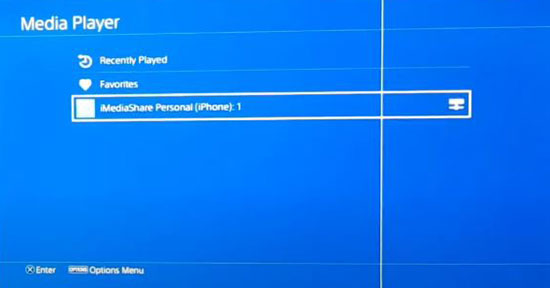 Step 3. Connect both your iPhone and PS4 to the same network. Now, you are free to any Apple Music song on iPhone and it will stream to PS4 at the same time.

Part 4. How to Play Apple Music on PS4 from Web Player

Although PS4 Apple Music integration is not yet available, you can access the Apple Music web player via the browser on PS4. This way, you can play Apple Music on PlayStation 4 with a good internet network. Follow the simple steps below to connect Apple Music to PS4.

Step 1. Turn on your PlayStation 4 and go to the content area, then select the Internet Explorer option on the home screen.

Step 3. Fill in your Apple Music account information. Once the login is complete, you can start listening to your favorite Apple Music songs on PS4.

How to Get Apple Music on PS4
AudFree uses cookies to ensure you get the best experience on our website. Learn moreGot It!