However, since the Apple Music web player is still a beta site, users are not available to access some features, such as the smart playlists, flagship Beats 1 live broadcast and some original music/video content. 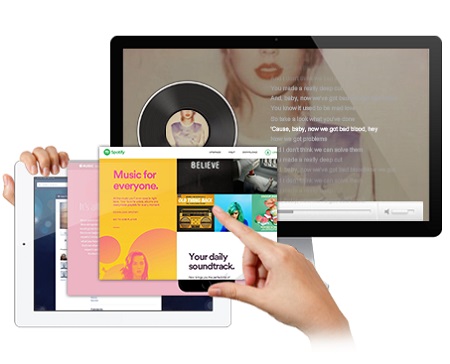 The new web player for Apple Music is compatible with all kind of browsers, such as Google Chrome, and with all non-Apple platforms like Windows 10, Chrome OS, Linux, etc. It can even work on a mobile system, containing Android.

Now the following instructions will guide you to use Apple music web player in simple steps.

Step 3. Once logged in, you will be able to access the entire Apple Music catalog and the tracks that you have uploaded to your library.

Tips: It is available to visit Apple Music's radio stations and Apple's personalized "For You" recommendation on the beta version.

Part 2. Listen to Apple Music on PC without iTunes via AudFree

As the newly released web player for Apple Music is not as full-fledged as Spotify's, you may encounter some unfriendly experience while using it.

But don't worry, to address your concerns, we'll recommend a more versatile way for you: use a third-party Apple Music tool to download and convert Apple Music to local files for playing without iTunes.

Before we getting to the tutorial, you need to be aware of the fact that Apple Music songs are saved in protected format, with which you are only allowed to enjoy Apple Music on iTunes or other authorized programs and devices. And that's the main reason why you can't play Apple Music on the web before the official web player is released. Therefore, other than using the Apple Music web player, you can convert Apple Music to local files by using AudFree Apple Music Converter.

As an all-in-one Apple Music converting tool, AudFree Apple Music Converter is specialized in transferring Apple Music from M4P to MP3, WAV, AAC, FLAC and other unprotected audio formats. After that, you are able to play Apple Music on web browsers without iTunes. Besides, this smart tool can keep original ID3 tags of the songs and let you change the bit rate, sample rate, codec all according to your own needs.

How to Download and Play Apple Music without iTunes

Launch AudFree Apple Music Converter. Then touch the first 'Add' button at the bottom left of the main interface in order to add all downloaded Apple Music M4P files to AudFree. Alternatively, you can drag and drop the offline Apple Music tracks to AudFree conversion window.

When all Apple Music songs are imported successfully to AudFree, click on the 'audio' icon next to 'Convert' to open the output format setting window where you can choose the output format as MP3, AAC, WAC or others. If you want to customize the music quality, you can simply change the audio codec, channel, sample rate and bit rate there.

Tab the 'Convert' button to begin converting Apple Music M4P songs to MP3. After conversion, you can locate the local Apple Music files on the target folder via clicking the 'history' icon. Then you are supported to listen to Apple Music without iTunes.

Part 3. Listen to Apple Music Online Without iTunes through Musish

There is another web player for apple music's playback without iTunes, which is named Musish. If you are interested in it, just follow the tutorial below to try this software.

Step 1. Go to Musish through any web browser.

Step 2. Sign in your Apple account in a separate window, which is under the domain of Apple.com.

Step 3. After that, you will see the usual Apple Music tabs on the upper left pane of the main interface.

Tips: Some categories have been simplified, such as radios, friend profiles in Social features, etc.

Best Way to Play Apple Music on PC without iTunes
AudFree uses cookies to ensure you get the best experience on our website. Learn moreGot It!