Do you love streaming Spotify songs? Will you love to find out what song has the most streams on Spotify? The company just announced the list of most streamed song on Spotify. This is the list of the songs most of you listen to every other day. Many of these songs have over a billion streams. This means that they have been streamed more than a billion times. This is an indicator of how popular Spotify is. 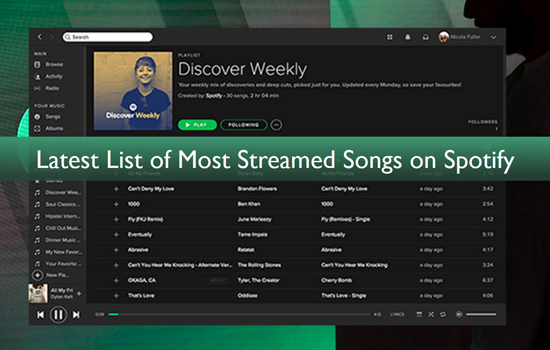 1. Shape of you by Ed Sheeran

This is the most streamed song on Spotify. It was first released on 3rd January, 2017. Currently, this song is the only one with more than three billion streams on Spotify.

2. Blinding Lights by The Weeknd

This is the second most streamed song on Spotify with over 2.8 billion streams. First released on 20th November, 2019, this song has wrapped up the numbers faster than any other song on the list.

3. Dance Monkey by Tones and I

Released on May 10th, 2019, "Dance Monkey" has been quite popular and this has seen it rise on Spotify's most streamed song list to take up the third spot. Currently, the songs boast over 2.5 billion streams.

"Rockstar" is the most streamed rap song on Spotify with more than 2.3 billion streams at the moment. It was first published on 15th September, 2017 as the lead single on the album Beerbongs & Bentleys.

5. Someone You Loved by Lewis Capaldi

This is the most streamed song by a Scottish singer on Spotify. Currently, it has over 2.2 billion streams. Released on November 8th, 2018, the song proved to be a hit from the first day and went on to win the 2020 Brit Awards Song of the Year Award.

6. One Dance by Drake, Wizkid and Kyla.

This is another song on the list with over 2.2 billion streams. The song was released on 5th April, 2016 for digital downloads and went on to top charts in 15 countries including the United States, the United Kingdom, Netherlands, Canada, Switzerland, Germany and France among others.

7. Closer by The Chainsmokers and Halsey

This song has done quite well garnering over 2.2 billion streams on Spotify. The song was first published on 29th July, 2016. The song proved to be quite a hit in the United States reaching the top position on the US Billboard Hot 100 and staying in the top spot for 12 consecutive weeks.

This is the 4th song on Spotify with over 2.2 billion streams. This is a soundtrack from the animation movie: Spider-Man: Into the Spider-Verse. As a single song reached number one on the US Billboard Hot 100 chat and also top charts in several other countries including Canada, Australia and New Zealand.

This is also one of the most streamed song on Spotify by a Canadian artist after One Dance by Drake and others. First Published on 21st June, 2019, the song has done quite well garnering over two billion streams on Spotify. The song topped charts in a record 40 countries including the USA and Canada.

Released on 1st February, 2017, this is the first rock song on Spotify's most streamed songs of all time. It has already been streamed over two billion times. Its success is because it has been immensely successful topic charts in more than 10 countries.

Released on 29th March, 2019, the song has done well garnering over two billion streams on Spotify. It was a chart top from the beginning reaching the top spot on charts in the United States, Canada, Australia, Russia, and Norway among many other countries.

This Ed Sheeran second song on the list of most streamed songs on Spotify is with over two billion streams. Released on 3rd March, 2017, the song was quite successful reaching the top spot on the UK Singles Chart and the US Billboard Hot 100 and going on top of many other charts worldwide.

This is the most popular song by the English singer James Arthur. It was first published on 9th September, 2016 and has been streamed more than 1.9 billion times on Spotify. The song topped charts in the UK, Australia, Sweden and New Zealand among others.

14. Thinking Out Loud by Ed Sheeran

This is the third song by Ed Sheeran on Spotify's list of most streamed songs of all time. It has been streamed more than 1.9 billion times up to date. It was released on 20th June, 2014 and went on to top charts and win awards including the Best Pop Solo Performance and the Song of the Year both at the 58th Grammy Awards.

This is the second song by Drake on the list having been streamed more than 1.9 times on Spotify to make it the 15th on the list. It was released on 19th January, 2018 in Drake's Scorpion album, and performed well winning the Best Rap Song at the 61st Grammy Awards.

"Lucid Dreams" was first released in June 2017. The song performed well topic chats in the United States and several other countries. It has amassed over 1.9 billion Spotify streams up to date.

This is another song by an English singer on the list. Released on 1st November, 2019, the song has been quite popular being streamed more than 1.8 billion times on Spotify.

This is the fourth song by ED Sheeran on this list. From his 2014 studio Album X, the song was quite popular topping charts in several countries including the United Kingdom and the United States. Currently, the song has been streamed more than 1.8 billion times on Spotify.

Streamed more than 1.7 times on Spotify, "Sad!" was released on 1st March, 2018 as the lead single from XXXTentacion's second studio album "?". The song went on to top charts in the USA following the singer's death in June 2018.

20. Starboy by The Weeknd and Daft Punk

"Starboy" has been streamed more than 1.7 billion times on Spotify since being released on 21st September 2016. The song reached the top spot on the US Billboard 100 and toped charts in several other countries including Canada, France and Sweden among others.

Part 2. How to Download Most Played Songs for Free on Spotify

If you want to listen to the most streamed songs on Spotify on any device without having to log into your Spotify accounts every time, then we have a solution for you. Using AudFree Spotify Music Converter, you can convert the most listened to song on Spotify to any format and download them even if you are a free user.

This tool will help get rid of all those annoying ads from Spotify and make sure you listen to your songs the ways you want. Most importantly, this converter will retain 100% of the high quality of your Spotify songs.

To use this AudFree Spotify Music Converter, follow these steps to download and convert most played songs on Spotify.

Download the AudFree Spotify Music Converter from AudFree official website and install it on your computer. Remember to get the right version for either your Windows or macOS computer. Once installed, then launch the application, so that you can download music from Spotify for free offline.

Find all the songs you want to download on Spotify and simply drag them on the converter's interface. Alternatively, find the songs and copy the URL link to it and the paste the link in the converter's search box and then click the "+" icon.

Open the menu bar and then open the Preference window. Select your chosen output formats from the list provided by clicking the drop-down menu and then change any other parameters as provided. Then click "OK" to save your settings.

Step 4Convert and download the most streamed song on Spotify

Click "Convert" and the conversion process will begin. Then the tool will convert and download Spotify songs to computer. Once downloaded, click the "Converted" icon to find most listened to songs on Spotify and play them on any device.

Part 3. FAQs about Most Listened to Song on Spotify

Q1: What Is the Most Streamed Song on Spotify?

The most streamed song on Spotify is the song that most people have listened to more times than any other song. Currently, the most streamed song on Spotify is "Shape of you" by Ed Sheeran. This song has been streamed over three billion times. What this means is that Spotify users cumulatively have listened to this song over three billion times since it was first uploaded on the platform.

Q2: How to See Your Most Played Songs on Spotify?

It is not possible to see your most played song on Spotify directly from your app. You need a third-party application to do so. For example, you can use the website Spotify.com/US/Wrapped. If you visit this website, you will be prompted to log into your Spotify account. The website will show you three categories: "on the Record", "Missed Hits" and "Your Top Songs 2021". Select "Your Top Songs 2021" and the website will show the top 100 songs you have played the most in descending order.

Spotify is one of the most popular and large music streaming services in the world. This is because it offers millions of high-quality songs that users love. However, not all songs on the platforms are loved the same. Some have zero streams while others have over three billion streams. If you love the most streamed song on Spotify and you would like to download them for listening offline, then why not use the AudFree Spotify Music Converter to download the songs even if you are a free Spotify user.