Twitch Spotify: How to Use Spotify on Twitch

Q: "Is music from Spotify allowed on streams? I'm new to streaming, and have been wondering if I am actually allowed to play Spotify on Twitch stream. Is it against any rule to play Spotify songs on my Twitch?" - from Reddit

Gaining widespread popularity in the world, Twitch is literally a leading live streaming platform in Music and Game field, which pays focus on video game and music live streaming. On it, streamers are allowed to enjoy listening to music while video gaming stream. No doubt that can be regarded as perfect thing for many live streamers.

But recently, Spotify Twitch topic has been brought into sharp focus in Twitch community. Scores of people discuss the possibility of playing Spotify music on Twitch. So then, is that possible? This paper gives a definite answer. 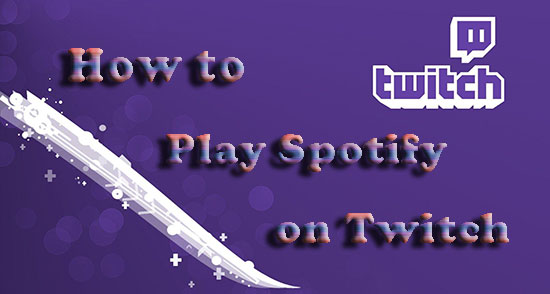 Part 1. Can I Play Spotify on Twitch Directly

Technically speaking, "No" is answer to this question. Why? On the one hand, Spotify content encoded with Ogg Vorbis format is limited to play within the Spotify app. Although Offline Mode allows premium subscribers to download music from Spotify, that doesn't mean you are licensed to use Spotify songs on Twitch.

On the other hand, Twitch strictly prohibits the use of copyrighted music. In the event that you play Spotify music without licensed permission, you might receive a DMCA violation strike. After 3 DMCA strikes, you account will be finished with a permanent ban.

Even though it is doubly constrained to use Spotify music on Twitch, this is not quite out of the question. Actually, Spotify provides a collection of gaming music, which are Copyright Claim Rree music and DMCA Free for Twitch. You are allowed to freely stream this kind of uncopyrighted Spotify song on Twitch with Spotify premium service.

As for Spotify music protected by copyright, only copyright restrictions are removed can you use it on Twitch stream. How to undo Spotify limits? The method is described below.

As mentioned earlier, Twitch stream only plays copyright-free music or songs licensed to be used. Streaming copyrighted tracks without permission on Twitch is technically illegal, which breaks Twitch official rules and will resulting in your account being banned. This, coupled with limitations of Spotify music itself, makes it impossible to straightway play Spotify music on Twitch.

No worries. With the support of a professional Twitch to Spotify converter - AudFree Spotify Playlist Converter, you can convert Spotify to royalty-free music lawfully, so that you have the allowance to use music from Spotify on Twitch without hassle.

Such a tool has inbuilt a flexible and sophisticated output system. According to individual requirements, you are able to select any output format including MP3, M4A, FLAC, AAC, etc., and step further to customize format parameters like channel, bit rate, frame rate, etc.

Besides, loss-free feature forms another attraction of AudFree Spotify Music Converter. During conversion, it has the ability to preserve 100% original Spotify audio quality and ID3 tags. That's something that almost all Spotify users value. What's more, it is not restricted to Spotify premium account. Users with free Spotify subscription also have the access to make use of it to convert Spotify playlist for playback on Twitch.

Part 3. How to Get Spotify on Twitch without Premium

And now, without firther ado, let's learn how to remove Spotify restrictions for playback on Twitch with AudFree Spotify Music Converter. Before starting, please make sure you have downloaded and installed the AudFree Spotfiy software on your computer.

Double-click to open AudFree Spotify Music Converter, in the meanwhile, the Spotify app will launch itself. Access Spotify music library to find Spotify tracks, playlists, or albums that you desire to play on Twitch. Then, copy the link by click the "..." icon > "Share", and paste to AudFree's search field. After that, touch "Add Files" shaped by the "+" icon to upload Spotify music to AudFree. Or, more simply, drag and drop your favorite Spotify songs to AudFree main interface.

Next, navigate to the "Menu" option (the shape of three lines) on the top right. From the droplist, you need to choose "Preferences" and tap "Convert" to show setting window. Depending on your own demand, you can select MP3, M4A, M4B, FLAC, AAC, WAV as Spotify output format, and adjust audio channel, sample rate, bit rate, etc. to get a better compatiblity with Twitch.

After the output is set, hit on "OK" button. You will be brought back to the main screen soon. Here, press the lower-right "Convert" button to let AudFree Spotify Music Converter start to download music from Spotify to local system. Upon completion, go to "Converted" window to find the downloaded Spotify music files.

How to Add Spotify to Twitch Stream
AudFree uses cookies to ensure you get the best experience on our website. Learn moreGot It!