Spotify premium not working offline is one of the most common issues that you can face once the subscription is purchased. This is a two-part problem that is simultaneously related to songs download as well as the offline enablement of the service. The other issue faced is the fact that you are unable to play the downloaded songs. If you try to do it there is a prompt to log in to your online account.

Spotify is a service that does not let you play the songs offline until you pay for the service or go premium to be precise. This offline listening can be hampered for several reasons. This guide will get you all the possible solutions that can be applied to get the issue fixed. If you get into this problem then don’t worry at all as we have got you covered completely.

There are several reasons for which the Spotify premium does not allow you to go offline. The most important reasons for Spotify offline not working will be mentioned in this section of the article.

This is one of the most common reasons for which the Spotify premium will not work offline. Even if the files are downloaded they may appear to the system as the cache file. Such files have an extension of .cache. Though this all depends upon the browser used in most of the cases it is the root cause of the issue.

This is another important aspect that can lead to issues. The DRM or the Digital Rights Management encrypts the songs on the platform. It is done to make sure that the unauthorized sales and distribution of the songs is prevented. Spotify not playing downloaded songs can happen because of this issue.

This is because this encryption does not let the downloaded songs play as it considers this a copyright infringement. The removal of DRM is necessary if you want to play the songs on other devices even if they are complete audio files.

Several methods can be applied to get rid of Spotify won't play offline error. This section will deal with all such errors and get you an idea about the issue.

This is the most basic method that can be applied. It consists of a myriad of problem-solving techniques that get you the results with perfection. You can troubleshoot the internet connection, messed up Spotify installation, and the memory availability. Most of the issues are just related to these terminologies which lead to the issue resolution.

There is an option where the offline Spotify files are downloaded directly to the SD card. This leads to slow reading and writing and thus can hamper the process of offline songs playing for the service. To make sure that the issue is resolved it is advised to replace the SD card and try again.

The Spotify downloads, not working errors can be resolved by following path C:\Users\Administrator\AppData\Local\Spotify\. Delete the folders of the browser, data, and storage. The users have reported that the issue under discussion is resolved once these folders are deleted. Don’t worry at all as these will be created automatically by the system once again.

To get rid of Spotify not downloading error AudFree Spotify Music Converter is among the most effective ways. It is not only easy to use but it also allows you to download and convert the Spotify songs without even buying the premium subscription. The formats that are supported include MP3, FLAC, AAC, and WAV.

By using this tool you can easily download any playlist or Spotify song that you wish for. It is available for both Mac and Windows operating systems.

How to Use AudFree Spotify Music Converter? 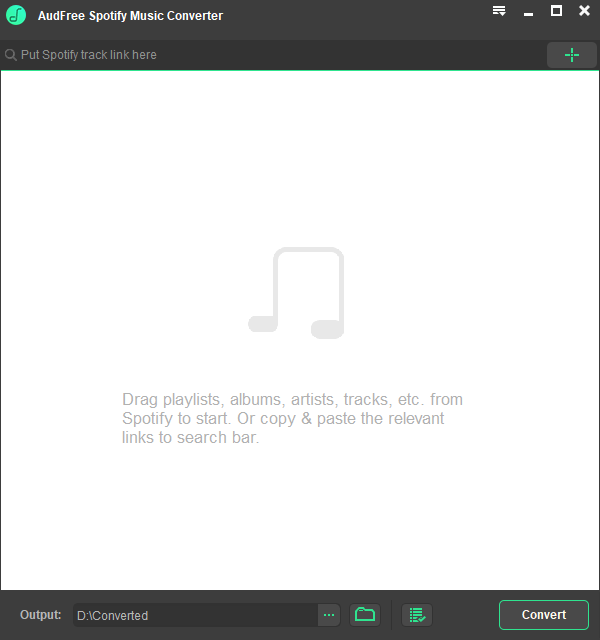 2 methods can be used to import the media. It includes "drag and drop" or copying the URL of the media at the top bar and then press "+".

Click the menu bar > preference to open the window to choose the output format and other settings. The default output format is MP3 which can be changed to other formats which the program support. The other settings such as bitrate, sample rate audio levels, and channels can also be customized as per the requirements.

Click convert at the bottom right corner to start the download and conversion of the Spotify media. Once the conversion has been finished you can use the songs to be played on any device whatsoever without any issue and error.

With over 35 million songs Spotify has been one of the best and the most used music streaming interface to ease of use, this program has it all. With the OGG Vorbis format, the downloaded files services of the recent era. Instead of getting into issues, it is strongly advised to get AudFree Spotify Music Converter to make sure that you never get into trouble. From an intuitive of the platform cannot be played on any device. To get rid of this issue such a converter is required that can change the format to MP3 which is the most common one. AudFree Spotify Music Converter is hence a choice that will save both time and effort and offer flawless performance at the same time.

Spotify Premium Not Working Offline
AudFree uses cookies to ensure you get the best experience on our website. Learn moreGot It!