How to Play Spotify Music on Other Players

What most is known about Spotify playback is that many portable Spotify players allow Spotify users to listen to music and playlists with the installment of Spotify app. However, there are still thousands of music players that are not compatible with Spotify app. Put it another way, it's impossible to play Spotify music on other players directly.

What should you do if you are planning to listen to Spotify songs on another player without Spotify app or because Spotify stops working coincidentally? If you don't know exactly how to do this, you can follow this article to learn the detailed tutorial on how to add Spotify music to other players for playback. 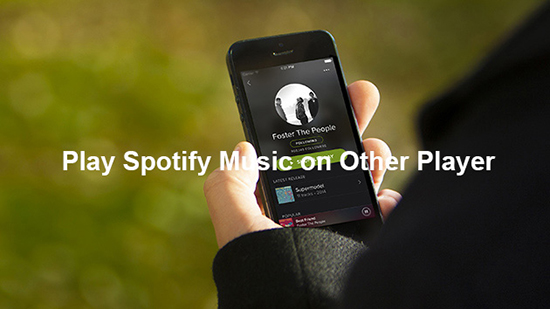 Part 1. Why Can't Play Spotify Music on Other Players

Most Spotify subscribers are baffled as to why they can't play Spotify music and playlists that you downloaded with Spotify premium subscription on other players. Before we get starting to introduce the tool to help us stream Spotify music to other players, let's discuss the reasons in advance. As a matter of fact, it could be caused by that Spotify songs are encoded in Ogg Vorbis audio format with built-in DRM protection technology.

If you would like to play Spotify music on other more music players, like iTunes, MP3 player, etc. it's necessary to remove DRM from Spotify music and convert Spotify Ogg Vorbis to MP3, FLAC, WAV or other plain audio formats that are playable on your target music player.

As for the best tool to convert protected Spotify playlists to common audio files, AudFree Spotify Music Converter deserves a try. It's a one-stop software designed for both Spotify free and paid users. It can not only losslessly get rid of DRM lock from Spotify songs and playlists but also convert Spotify to MP3, FLAC, WAV, AAC, M4A, and M4B with zero quality loss.

Part 3. How to Transfer Spotify Music to Other Players - Detailed Guide

Please download the AudFree Spotify Music Converter on your Mac or Windows computer by clicking the above 'Download' button. After that, you can refer to the following step-by-step tutorial to sync Spotify music to other players.

Launch Spotify Music Converter on your computer, and Spotify app will be opened at the same time. Now, you can discover the favorite songs and playlists on Spotify app now. Please be well noted that you can just find Spotify songs but can't play them as Spotify keeps silently. Just drag and drop audios from Spotify to the main interface of AudFree or copy and paste the Spotify link to the search box of AudFere and click the ’+‘ button to load them.

To play Spotify playlists on other players, MP3 is highly recommended to define as output format, since it is fully compatible with almost all music players. If you care more about the listening experience, you can choose lossless FLAC or WAV format. Just click the 'AudFree Spotify Music Converter' from the Apple's menu bar and click the 'Preferences' > 'Convert' to open the setting window. You can customize output format as you like and other audio parameters, like sample rate, bit rate, audio channel, etc.

Step 3Download and convert Spotify music for other players

To launch the downloading and converting process, you just need to simply press the 'Convert' button at the bottom-right corner. There is a progress bar on the currently converting song, which can detect the conversion progress in real time. After conversion, you can click the 'history' > 'search' icon to locate local audio files on your computer. You can start to transfer them to other players that you'd like to play Spotify music.

Best Way to Play Spotify Music on Other Players
AudFree uses cookies to ensure you get the best experience on our website. Learn moreGot It!