An audio equalizer is a filter that adjusts specific sound frequencies in your music to raise, lower, or hold them constant. By isolating and modifying these specific frequency ranges, you can dramatically change the overall sound signature of your music. Is there a Spotify equalizer to customize audio settings?

Yes! Back in 2014, Spotify introduced an equalizer feature for Spotify subscribers to customize audio settings for bass, midrange, and treble for their specific needs. But for new subscribers, it's hard to find this equalizer. Also, Spotify only has an equalizer for Android and iOS, but it doesn't have one for Windows and Mac.

So, here we will present the best equalizers for desktop and mobile and how they work on different devices. You will also get to know what are the best Spotify equalizer settings to make Spotify sound better.

Part 1. How to Use Spotify Equalizer PC & Mac

When you open Spotify desktop client, you will be confused to find out that it seems there is not an equalizer for Spotify on Mac or Windows computer. As for this issue, you can search 'Spotify Equalizer PC' on Spotify Community to get the official answer as below:

'By considering it again and again, we have decided not to create an equalizer for Spotify desktop app at this time instead making this idea as Case Closed. In fact, they are always used by a small audience and Spotify will focus on features that have higher engagement.'

As a result, what should we do to customize music quality for own hearing tastes on Windows or Mac? Fortunately, there are a wide variety of third-party Spotify desktop equalizers, such as Equalify Pro for Windows machine and the eqMac for Mac. Here, we will take both of them as examples to guide you on how to use equalizer on Spotify PC and Mac.

Equalify Pro is an equalizer for Spotify Windows, supporting Windows 7 or above. It only supports Spotify installed from the official Spotify website, and currently does not support the Windows Store version of Spotify. Here is how to use Spotify equalizer Windows: 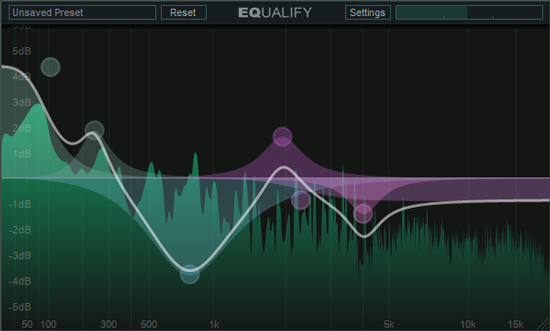 How to Use Equalizer on Spotify on Windows with Equalify Pro:

Step 1. Please install Equalify Pro on your Windows computer firstly and it will integrate into Spotify desktop app automatically;

Step 2. Launch Spotify app on your computer and play your favorite songs via Spotify app. And then you will see there is a small 'EQ' icon at the top bar;

Step 3. Just hit on the 'EQ' button, it will pop up the equalizer window, in which you can customize the music preset according to your needs.

eqMac is an equalizer for Mac. It is very light and does not interfere with the normal use of your system. You can run it hidden in the menu bar, where you can access its slim interface by clicking on its icon. Fortunately, it is open source, so there is no cost involved. Now let's see how to use this Spotify equalizer Mac.

How to Use Spotify Equalizer on Mac with eqMac:

Step 1. Visit www.eqmac.app to download eqMac.dmg file, then drag it to Applications directory and launch on Mac;

Equalizer for Spotify is available for both Android and iOS mobile apps. It allows users to preset the audio settings to get favorite music sounds on devices. To change Spotify equalizer, you don't need to download and use third-party software but for Spotify app only. Here's how to change equalizer on Spotify on iOS and Android.

Step 1. Open Spotify app on your iPhone, navigate to 'Your Library' tab in the lower-right corner and touch the 'Setting' button at the top-right corner;

Step 2. In the setting window, you need to select 'Playback' and then you will see there is an 'Equalizer' option. Please tap the toggle to turn on the equalizer;

Step 3. You will see a list of preset equalizers for different types of music. In Spotify's case, 60Hz to 150Hz corresponds to the bass, 400Hz to 1KHz the midrange, and 2.4KHz to 15kHz to the treble. You can start to adjust the music preferences to the right one with best sounds by dragging the little white dots;

Step 4. When all settings are ready, just touch a preset to apply them, and you can get back to the home screen and listen to Spotify music in most suitable taste. 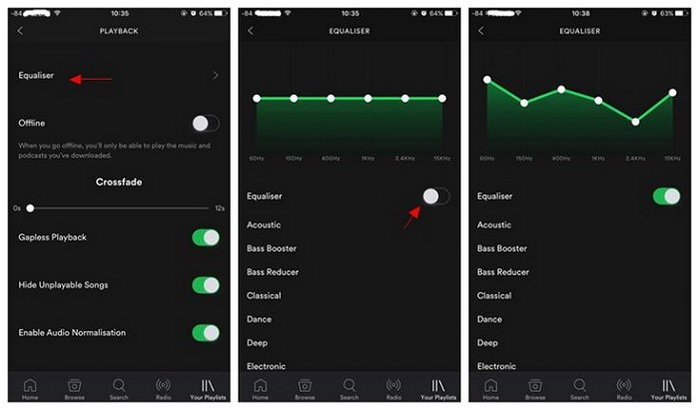 Step 1. Launch Spotify app on your Android phone. And you can hit on the 'Library' tab on your bottom-right hand corner to choose Setting option;

Step 2. In the Music Quality section, please scroll down to Equalizer button and click on it. It will pop up a prompt and you can just click 'OK' to skip it;

Step 3. Android manufactures allows users to install and use your own equalizer instead of using Spotify's equalizer. You just need to choose the favorite equalizer to start adjusting music preferences;

Step 4. Please keep the Equalizer turned on and find which best suits you. When done, you can start to listen to nice audio quality on Spotify app. 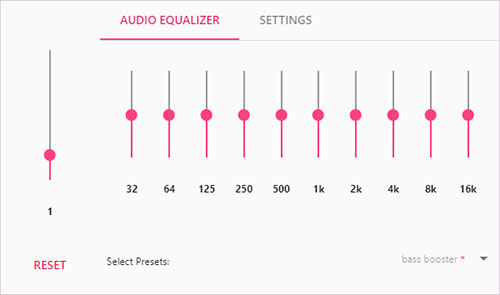 Step 1. Search EQ - Audio Equalizer on Google Chrome browser. Then, go to its overview page and click on "Add to Chrome";

Step 2. Next, it pops up a window to ask you to add to Extension. Operate as instructed and EQ - Audio Equalizer will show on the top menu of bar of Extensions;

Step 3. Navigate to Spotify web player and play any track or playlist. Click the Audio Equalizer to enable it;

Step 4. On the panel of Audio Equalizer, hit on the drop-menu button of "Default" to select Equlizer preset based on your needs and enjoy Spotify music with Equalizer.

What are the best Spotify equalizer settings? Unfortunately, the answer to this question is: it's something you'll need to figure out for yourselves. It depends on the type of music you're interested in, the speakers you primarily listen to on Spotify, and a variety of other factors.

The best thing we can suggest is to set up an equalizer preset. Having presets will save you a lot of time when listening to different kinds of audio files. You can find the best presets you like and set it as your equalizer preset.

Spotify's Android and iOS apps have different sets of equalizer presets. But even then, presets designed to achieve the same sound signature won't sound exactly the same. Now, let's discuss the equalizer presets used for each platform.

1. Normal: A very basic V-shaped preset with sub-bass, bass, mid-treble and brightness slightly cranked up. It produces a very well-rounded sound, no matter what type of audio device is used.

2. Pop: This preset prioritizes the midrange and slightly reduces the lows and highs. It's common vocals (mainly male) stand out from other frequencies.

3. Classical music: All frequencies are almost equal, except for the midrange. With this EQ preset, you may hear male vocals slightly quieter than instruments.

4. Jazz: It sounds very similar to the normal preset, but with a slightly higher gloss than the bass. The mids are slightly lower at around -3dB, so vocals will be slightly quieter than other frequencies.

5. Rock: The mids, highs and gloss are turned up by 3dB and 5dB respectively. the sound will be noticeably brighter because most rock songs are dominated by guitar melodies.

1. Bass booster and diminisher: the first one increases bass and the other one decreases it.

2. Treble Booster and Diminisher: changes the high frequency sounds in music and podcasts. The treble booster is suitable for listening to podcasts. It makes the sound more clearer.

5. Dance: Boosts the bass. Most songs will have deeper bass with this preset, but you may lose a lot of treble frequencies, such as female vocals and stringed instruments.

6. Depth: Quite similar to the "Dance" preset, but it significantly lowers the highs. If you're listening to a song with a strong bass, this preset may shake your eardrums.

7. Electronic: Emphasizes brilliance. Will make any song sound brighter, with the highs more pronounced than other frequencies.

8. Bland: Doesn't actually change anything about the song.

10. Jazz: For people who like to listen to jazz. The three main sounds of this preset are the sub-bass, midrange and brightness. With this EQ, instruments and vocals are slightly clearer.

11. Latin: Female vocals and string instruments will be louder with this preset.

12. Loudness: Boosts the sub-bass, not other frequencies.

13. Rest: Midrange frequencies are more pronounced than bass and treble, designed for relaxing and calming songs.

16. R&B: This preset sounds a lot like hip-hop, but with more treble. If you like to listen to songs with strong bass and female lead vocals, this preset is for you.

17. Rock & Roll: Brilliance is very obvious. But the mids, especially the male vocals, are slightly muffled in the guitar and cymbal-heavy songs.

Part 5. How to Play Spotify with Equalizer Music Player

In fact, there are still many music players that include an equalizer, such as VLC, and you can use them directly to play your favorite Spotify songs. This way, you don't need to find a Spotify equalizer.

As for the detail tutorial on how it works, you can visit this source page: How to Convert Spotify to MP3. After the download from Spotify, you can adjust the equalizer from any music player to enjoy high-quality Spotify files on any platform, such as Windows, Mac, Android, iOS, etc.

How to Download Spotify Music for Playing on Equalizer Music Players

You can directly drag your favorite Spotify songs to AudFree Spotify Music Downloader. Or you can copy and paste the URL of the song and click on '+' to add the song. You can add as many songs as you want because this downloder can batch download Spotify songs.

Click on the 'menu' icon at the top right of the screen and then select the 'Preferences' option and 'Convert' tab. This will lead you to the output settings window. You can select output format according to your desired equalizer music player. You can also change other audio parameters if you want.

Once you click on the 'Convert' button at the bottom right, all your added Spotify songs will be downloaded automatically. It will download in bulk at a faster speed of 5X. Once completed, click on the 'Converted' icon to find your Spotify songs.
Step 4Play Spotify Songs on Equalizer Music Player
You can now locate the downloaded Spotify songs from your computer's local folder. They can be played with any music player in your computer. So, you can now enjoy Spotify with any equalizer music player without having to download an equalizer for Spotify.

In addition to the tips we've summarized in the section above, we've also selected some frequently asked questions about Spotify equalizer.

Q1: Can I Use Spotify Equalizer with a Free Account?

A: Yes, the equalizer function on Spotify is available for both Spotify Premium and Free users.

Q2: How Can I Get Equalizer on Spotify?

Q3: What Is the Best Equalizer Setting on Spotify?

A: Actually, there is not a best equalization configuration that you can use across the board. The equalizer settings can be different for different devices, streaming qualities, music genres, and even individual songs.

In short, you can find a setting you like best and turn it into a preset to save a lot of time.

Q4: How Do I Make Spotify Sound Better?

A: You can use some features on Spotify to make your listening experience better, such as Spotify equalizer, audio normalization, audio quality levels, hardware acceleration, and transition settings.

Today we've guided you on how to use and change Spotify equalizer on all devices. Now get a good pair of headphones, turn on equalization feature on Spotify and enjoy your music! But if you don't want to download extra equalizers for Spotify, you can think about listening to Spotify songs with other equalizer music players. Enjoy Spotify indefinitely with AudFree Spotify Downloader.

Spotify Equalizer on PC/Mac/Android/iOS
AudFree uses cookies to ensure you get the best experience on our website. Learn moreGot It!