We have seen a few people requesting how to convert Spotify to lossless FLAC, since they heard the saying that FLAC offers bit-perfect copies of CDs and sounds better than MP3. Well, to be honest with you, there is no direct way to convert Spotify to FLAC because all Spotify songs are encoded in OGG Vorbis format and readable by the Spotify app only. 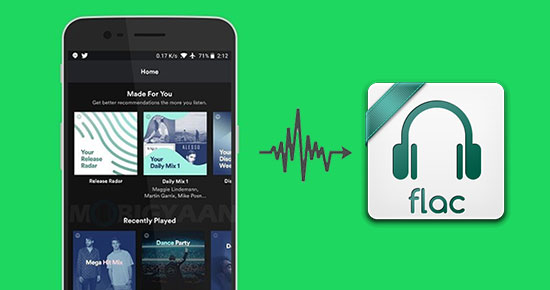 AudFree Spotify Music Converter is an excellent Spotify to FLAC downloader and converter specialized in FLAC download from Spotify. No matter you are using a Spotify free or Premium account, AudFree Spotify Music Converter enables you to download any content from Spotify, including songs, playlists, albums, podcasts, and audiobooks, and convert them to free lossless music in FLAC. It's worth mentioning that this great tool is also capable of converting Spotify to 5 other audio formats besides FLAC, which are MP3, WAV, AAC, M4A, and M4B.

As a full-featured Spotify music converter, apart from setting the 'lossy' output format as FLAC, it enables you to customize other output audio parameters including bit rate, channel, and sample rate. Adopting advanced technology, AudFree Spotify Music Converter can grab all metadata such as artist, title, genre, album art of the music and save in the Spotify FLAC local files. Anyway, with the help of this smart solution, you can convert all contents on Spotify to FLAC with ease.

Part 2. How to Download Music from Spotify to FLAC Losslessly

To get prepared, please download and install the free trial version of AudFree Spotify Music Converter for Mac or Windows on your computer. You are required to install the Spotify desktop app as well. Here we use the AudFree Spotify Music Converter for Windows for demonstration. Please refer to the following detailed tutorial to download and convert Spotify to FLAC losslessly if you are ready.

Double-click to launch AudFree Spotify Music Converter on your computer, and you will see that Spotify app will open itself shortly after. And then you can import Spotify music to AudFree either by dragging and dropping the music into the software directly or copying and pasting the URL of Spotify track to the search box on top of the AudFree interface. After that, hit the '+' button to load.

When all settings are saved, please press the 'Convert' button to activate the converting process, and AudFree will start to rip Spotify to FLAC and save them in FLAC music Spotify. If this process happens on a Windows computer and AudFree is able to run at 5X high speed. You are also given the option to select 1X FLAC Spotify conversion speed and ensure a more stable procedure.
After conversion, you can find the Spotify FLAC local files by clicking the 'converted' icon with the number of how many songs you have converted. Then you can find them in the destination folder on your computer. Now, you can play them on other media players outside Spotify, or transfer Spotify FLAC files to the devices that can read FLAC format for offline listening.

Video: How to Convert Spotify to FLAC Losslessly

Apart from the above step-by-step tutorial, you can also watch this video tutorial to learn clearly how to use this Spotify to FLAC converter from AudFree.

What Can We Benefit from Converting Spotify to FLAC?

FLAC stands for Free Lossless Audio Codec, an audio format similar to MP3, but lossless, meaning that audio is compressed in FLAC without any loss in quality. FLAC can compress an original source file by up to 50%-60%, half the size of a true CD rip, without losing a single bit of data. What's even nicer is that FLAC is an open-source and royalty-free format rather than a proprietary one, so it doesn't impose any intellectual property constraints.

Being a widely used audio format, FLAC is compatible with many devices. For example, if you're on an iPhone running iOS 11 or above, your device has full native support for FLAC files. Any iOS versions before 11 can find a free FLAC player from the App Store, such as VLC for Mobile, Flacbox, or VOX.

This is also a question frequently asked since many long-time Spotify users are aware that Spotify app lets users add local files to Spotify for offline playback. However, according to Spotify as in the picture below, Spotify does not support FLAC. 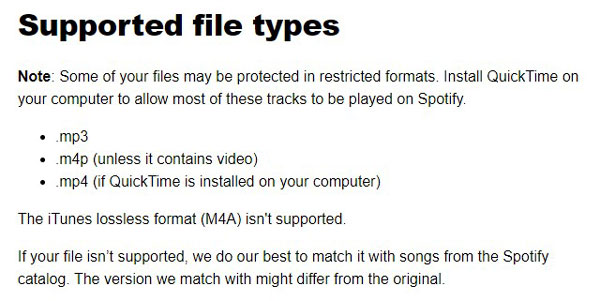 But since FLAC files are compatible with a wide variety of media players, like VLC, SMPlayer, RealPlayer, and KMPlayer, you can play Spotify music on VLC on a Mac or Windows computer after converting them to Spotify FLAC files.

Last but not least, Spotify free users can stream music up to 160 kbps while upgrading to Premium with $9.99 per month, you can enjoy music at 320 kbps. With the help of AudFree Spotify Music Converter, you are free to download and convert Spotify to FLAC losslessly and save them at a bit rate of 320 kbps. This way, even when you cancel your Premium subscription, you can still keep the high-quality music in FLAC.

Convert Spotify to FLAC Losslessly
AudFree uses cookies to ensure you get the best experience on our website. Learn moreGot It!